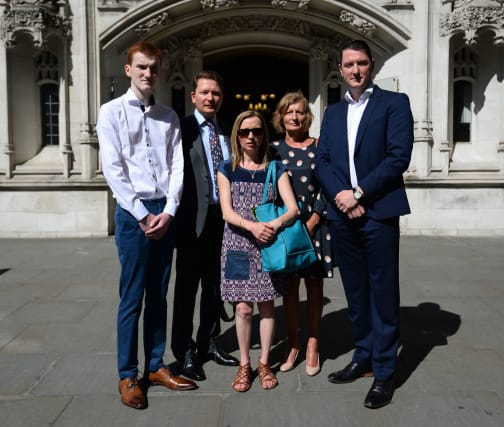 The UK’s highest court is set to rule on a legal challenge brought by the family of murdered Belfast solicitor Pat Finucane.

Mr Finucane was killed in February 1989 by loyalists in an attack found to have involved collusion with the state.

The 39-year-old was shot 14 times while enjoying Sunday lunch at home with his family.

His widow Geraldine claims the Government unlawfully “reneged” on a promise to hold a public inquiry into the killing, which was one of the most notorious of the Troubles.

Sir Desmond found “shocking” levels of state collusion involving the Army, police and MI5 but ruled out an “overarching state conspiracy”, prompting Mrs Finucane to describe it as a “whitewash”.

In February 2017, Mrs Finucane lost at the Court of Appeal in Belfast when three judges dismissed her case that Mr Cameron’s decision to reject a public inquiry was unlawful.

On Wednesday morning, just over 30 years on from her husband’s murder, the Supreme Court in London will rule on the latest round of Mrs Finucane’s long legal battle.

At a hearing in June, Barry Macdonald QC said Mr Finucane was a victim of “a policy of systemic extra-judicial execution that was as cynical and sinister as can be imagined”.

He told a panel of five justices, including the court’s president Lady Hale, that “loyalist terrorist organisations were infiltrated, resourced and manipulated in order to murder individuals identified by the Army and the police as suitable for assassination”.

He said this policy was “widened” to include lawyers such as Mr Finucane, who represented a number of high-profile republicans.

Mr Macdonald concluded: “The police, the Army and the security service MI5 are all implicated in a policy that entailed identifying lawyers with their clients and legitimising them as targets for assassination.”

Sir James Eadie QC, representing the Secretary of State for Northern Ireland, told the Supreme Court that the lower courts which considered the case had correctly concluded that the decision-making process relating to the public inquiry was a “thorough, genuine and lawful” one.

At an event in Belfast to mark the 30th anniversary of Mr Finucane’s murder earlier this month, his son John said his father had been killed to silence other human rights lawyers.

He said: “It was a deliberate decision to kill him, to silence other lawyers and prevent them from doing that type of work.

“What we see now is a generation coming through with lawyers, people wanting their human rights.

“I think that is very much a legacy of Pat Finucane and what he stands for and represents.

“That gives me enormous pride. While they did silence him, they could not have made a bigger mess of it if they tried.

“The name reverberates around the world and an enormous amount of credit for that is due to my mother.”