Rare whisky with Sir Peter Blake label up for auction 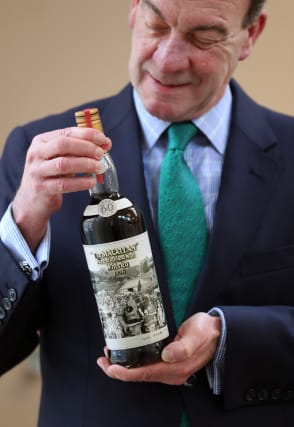 A rare bottle of whisky worth up to £700,000 with a label designed by the Sgt. Pepper’s album cover co-creator is going up for auction.

It lay at the distillery for more than six decades in an oaken cask brought from Spain, before it was bottled in 1986.

Only 12 bottles with the label designed by Sir Peter – most popularly known for co-creating the iconic cover for The Beatles’ 1967 album Sgt. Pepper’s Lonely Hearts Club Band – were issued.

Bonhams whisky specialist Martin Green said: “It is dark honey-gold in colour, and is almost inconceivably smooth with a luscious hint of dry-sweetness in the malt.”

At the time, this set a world record for a bottle of whisky at auction and is still the highest price paid for a Macallan 60-year-old 1926 from the Blake series.

The whisky sale takes place on Wednesday March 6 starting at 11am.