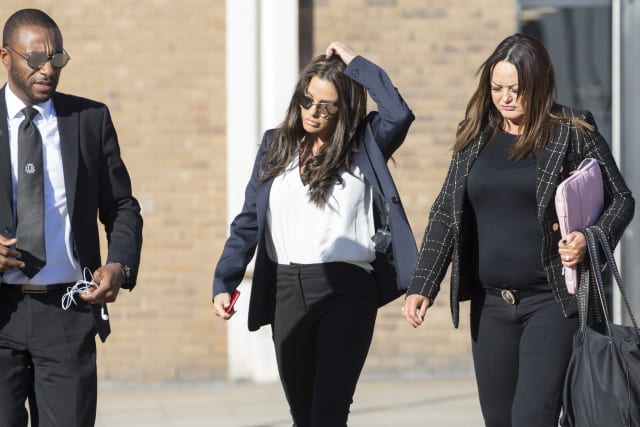 Former glamour model Katie Price was found slumped in a "very" drunken state in the back of her vomit-covered pink Range Rover after police saw the vehicle collide with a grass verge, a court has heard.

The 40-year-old was allegedly almost twice the legal limit when she was arrested in the early hours of October 10 in Shooter's Hill, Greenwich, south-east London.

Price denied an additional charge of drink-driving when she appeared at Bexley Magistrates' Court, having already entered a not-guilty plea to being in charge of a vehicle while over the limit.

Police Constables Benjamin Jones and Balvinder Mann first saw her car veer off the road and hit a grass verge at 12.40am before seeing it stationary about 15 minutes later.

Pc Jones told the court that he approached the car to find Price in the back of the vehicle with her boyfriend, Kris Boyson, in the passenger seat.

"Her eyes were blurred and her speech was a bit slurred. Although she was sitting, it was in a slumped position," Pc Jones said.

"I could smell alcohol. In my opinion she was drunk."

Prosecutor Sonya Saul asked how drunk, to which the officer replied: "I would say very."

The car, he added, showed signs of a collision, with the bumper hanging off and pieces of shrubbery attached to its exterior.

Pc Jones went on: "I also noticed what appeared to be sick on the outside of the car."

Both Price and Mr Boyson said a third person had been driving and that they ran off after the trio had an argument, the court heard.

The officer said Mr Boyson told Price to "shut up" when she was asked who was driving.

They both said the unnamed person who fled the car had the key, but the car's engine later turned on, he told the court.

Price was arrested in a shoeless state and taken to Plumstead police station for a breathalyser test, having allegedly refused one at the side of the road.

Ms Saul concluded: "The Crown says that Katie Price was clearly in charge of the car while drunk and also had been driving the car before it was stopped while over the limit."

Price, who lives in Horsham, West Sussex, was met by a mass of photographers as she arrived at the court in a black Mercedes.

Wearing a navy suit jacket, she had numerous coughing fits as the hearing began.

It is alleged Price had 69 microgrammes of alcohol per 100 millilitres of breath. The legal limit is 35 microgrammes.