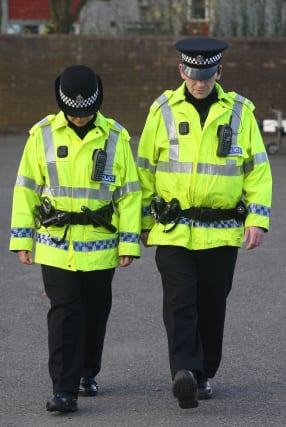 Two men launched an “extremely violent and cowardly attack” in South Lanarkshire which saw the victim lose some of his teeth.

A 26-year-old man was walking from the shops on Maxwellton Place, East Kilbride, when a silver Subaru Forrester or Outback pulled up beside him, at around 6.30pm on Thursday.

He was approached by the passenger of the vehicle who attacked him before a second man exited the vehicle and threatened him with a knife.

The victim managed to make his escape and alerted Police Scotland.

Emergency services attended and he was taken by ambulance to Hairmyres Hospital for treatment to a facial injury, which resulted in the loss of two teeth.

Detective Constable John Law from Cambuslang CID said: “This was an extremely violent and cowardly attack on the victim and it is vital that anyone with information which could help us trace the abhorrent individuals responsible comes forward.

“I would appeal to anyone who was in the area and either witnessed what happened, or noticed this particular vehicle in the area at the time, to come forward.”

The first suspect is described as being about 30 years old, white Scottish, approximately 6ft 1in, of skinny build, with short black hair.

He was wearing a black jacket, black jogging bottoms and white trainers.

The second suspect is described as white Scottish, average build, and approximately 5ft 8in. He was wearing a black parker jacket with a furry hood and black bottoms.