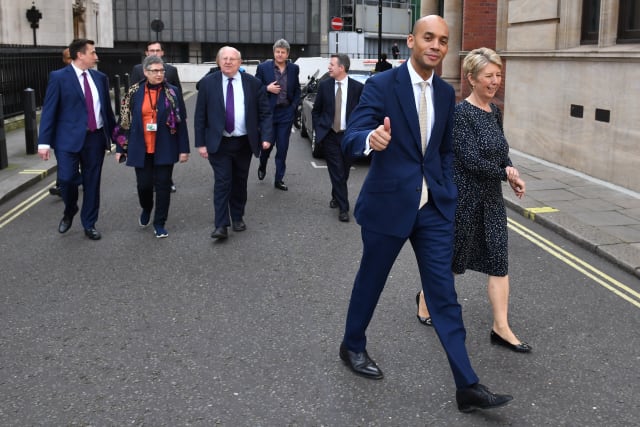 Theresa May could be propped up by the Independent Group if she agrees to a second Brexit referendum, one of the breakaway MPs said.

Former Labour MP Gavin Shuker said if Mrs May agreed to a public vote on the Withdrawal Agreement it would be in the national interest to make sure there was a “period of stability” to allow that to happen.

Mr Shuker said he had made a similar offer while he was still in the Labour Party before Monday’s dramatic announcement of the split from Jeremy Corbyn’s party.

He suggested a confidence and supply agreement would be conditional on support for a referendum along the lines of the compromise plan set out by Labour backbencher Peter Kyle, which would see MPs back the Withdrawal Agreement but the public then be given the final say.

The Luton South MP told HuffPost UK’s Commons People podcast: “We need a general election like a hole in the head right now, we’re 900 hours to Brexit and we’re going to crash out without a deal unless something replaces that.

“I think the most sensible way forward is for the Government to adopt what’s become known as the Kyle amendment because it would do exactly what I said before there.

“And in those circumstances I think the national interest would be served by seeing a period of stability to get that referendum done.”

Meanwhile the Prime Minister appeared to step up efforts to prevent further defections from the Tory ranks by meeting two prominent Conservative supporters of a second referendum.

Her invitation to Phillip Lee and Justine Greening followed warnings the party was “destroying itself”.

Sarah Wollaston, one of the three Conservatives who quit to join the Independent Group (TIG) this week, suggested a third of the Cabinet could walk out if Mrs May steers the country towards a no-deal Brexit.

“I know that there are many colleagues on my side who will be watching carefully and expecting Theresa May to be certain that she is not going to take us out on a no-deal Brexit,” Dr Wollaston told BBC Radio 4’s Today programme.

“Certainly I think that a third of the Cabinet, I’m pretty clear, would walk if they were looking at a no-deal Brexit.”

In a sign of the unrest in the Tory ranks, former Cabinet minister Ms Greening and ex-attorney general Dominic Grieve have both indicated they would leave the party if the Government backed a no-deal Brexit.

“It is something that I have considered, but I have reached a different conclusion for the moment,” Ms Greening told Today.

Her invitation to meet Mrs May came after repeated requests.

Dr Lee was also in Downing Street to lobby the Prime Minister about the Right to Vote campaign – which he chairs – and its call for a pause in the Brexit process to allow a public vote.

The Bracknell MP quit the Government over Brexit and has been the subject of speculation about his future.

Downing Street was forced to defend Mrs May’s approach to tackling immigration after Anna Soubry, another of the Conservative defectors, accused her of having a personal “problem” with immigration.

Ms Soubry told BBC2’s Newsnight: “The only reason why she will not agree to the single market is because of free movement of people… I look at the evidence, and I think she’s got a problem with immigration.”

Mrs May’s official spokesman said: “The Prime Minister is focused on delivering an immigration system post-Brexit which allows us to take back control of our borders and ensures this country continues to allow in the brightest and best.

“Immigrants make a huge contribution to our public services and economy and that’s going to continue after Brexit.”

Ms Soubry also revealed that ex-prime minister David Cameron had pleaded with her, Dr Wollaston and Heidi Allen to stay on the Conservative benches.

She told The Times Red Box podcast that Mr Cameron sent them a text saying: “Is it too late to persuade you to stay?”

Mr Corbyn urged the TIG MPs to stand down and fight by-elections under their new banner, which he dismissed as “the failed business-as-usual politics of the past”.

Responding to the accusations of defecting MPs like Luciana Berger that he had failed to tackle anti-Semitism in Labour ranks, Mr Corbyn said he was “utterly determined to root out anti-Semitism from our party and our country”.