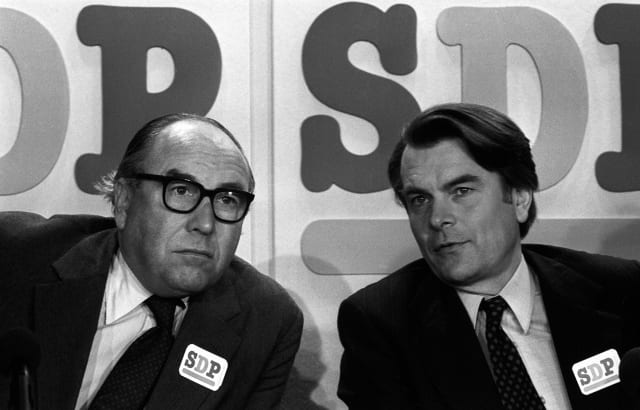 The resignation of seven MPs from Labour will revive memories of the emergence of the Social Democratic Party in similar circumstances in the early 1980s.

The SDP was founded in 1981 by centrist Labour MPs dismayed by the party’s shift to the left under then leader Michael Foot, with a mission to reshape the landscape of British politics.

It enjoyed a period of great popularity, briefly topping the polls and picking up a number of spectacular by-election victories, but failed to make a decisive breakthrough, eventually merging with its Alliance partners the Liberals to form the Liberal Democrats in 1988.

And it was blamed by many on the left for splitting the “progressive” vote in a way which helped Margaret Thatcher’s Conservatives dominate UK politics throughout the 1980s.

The “Gang of Four”, who launched the Council for Social Democracy with the publication of the Limehouse Declaration setting out their principles, included some of the Labour Party’s most senior figures, who had recently served in the Cabinet of James Callaghan.

Some 28 Labour MPs – and one Conservative – eventually joined the new party, and their numbers in Parliament were bolstered by the victories of Mrs Williams and Mr Jenkins in by-elections at Crosby and Glasgow Hillhead.

Activists who joined the SDP included today’s Liberal Democrat leader Sir Vince Cable, who had been working as a Labour adviser, and his predecessor, Charles Kennedy.

The new party went into an Alliance with the Liberals under David Steel within months of its creation, and together they secured 25% of votes in the 1983 general election – just short of Labour’s 28% but well behind the 44% share claimed by Tories.

But the first-past-the-post system was unkind to the Alliance, which picked up just 23 seats – only six of them taken by SDP MPs.

Two more by-elections were won over the course of that Parliament, but in 1987 the Alliance’s share of the vote dipped to 23%, with the SDP left with just five MPs and Mr Jenkins losing his seat.

Mr Owen – by then leader of the SDP – resisted a merger with the Liberals the following year and fought on to the ignominious conclusion of the 1990 Bootle by-election, where its candidate finished seventh behind the Monster Raving Loony Party.

After the official disbandment of the party by Mr Owen, the SDP was revived by former activists and remains a presence in local politics in some areas, recently gaining its first MEP with the defection of Patrick O’Flynn from Ukip.

For many in Labour, the SDP is remembered for an act of treachery which they believe helped deliver a decade of Thatcherism and 18 years of Tory rule.

For others, it provided the template for the blend of free market economics and social justice which Tony Blair attempted to put into effect during the New Labour era.

But for most observers of British politics, its greatest legacy is as a salutary reminder of the enormous difficulties facing any new party seeking to break through in a Westminster political system based on first-past-the-post.