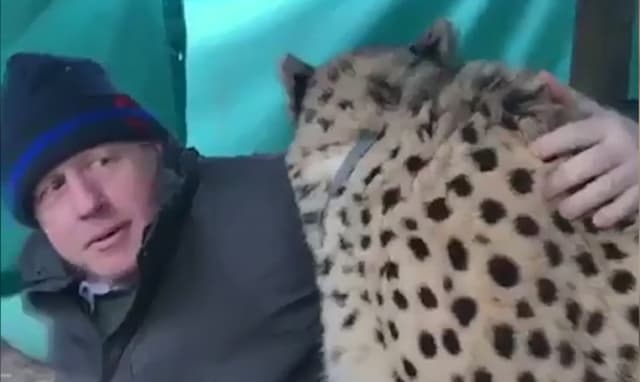 Boris Johnson came face to face with a large male cheetah on Sunday as a visit to Howletts Animal Park in Kent turned into a hands-on experience with one of the world’s most efficient predators.

More used to handling the carnivores of Westminster than the Serengeti, the former foreign secretary looked visibly unsettled in a video of the meeting posted to his Twitter account.

Captioning the clip, he wrote: “This weekend I went to @howlettspark where I met Saba the cheetah who will soon be released into the wild. He nibbled my hat. You can see I was totally calm and at ease…”

Animal handlers can be heard saying “Just relax” and “Don’t push him away” as a nervous-looking Mr Johnson pets Saba, who stands over the sitting old Etonian.

Appearing to accept his fate, he leans into the animal as it gives his woolly hat a lick and bite, accompanied by something between a purr and a growl.

Twitter users did not miss the opportunity to poke fun at the Tory MP for Uxbridge and South Ruislip.

“Cheetahs don’t eat snakes, you got lucky,” joked one.

“If he can’t even bite ready prey he’s not going to survive in the wild, alas,” quipped another.

“Caption contest: One cheetah comes face to face with another,” added a third.

Vote Leave, the EU referendum campaign fronted by Mr Johnson, was fined by the Electoral Commission in July 2018 for exceeding its spending limit by almost £500,000.

While Mr Johnson has not been pictured publicly since sharing the video on Sunday night, his Twitter account did retweet the Daily Telegraph on Monday, suggesting he survived the ordeal.