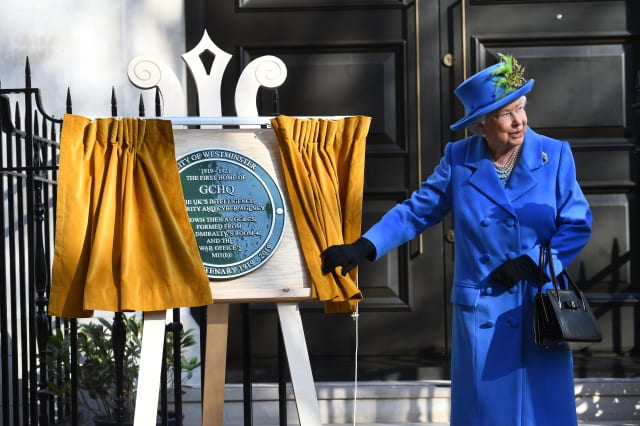 The head of GCHQ said his agency has “saved countless lives” and “shortened wars” as the Queen celebrated the 100th anniversary of the intelligence, security and cyber organisation.

The Queen has been receiving intelligence from the agency for much of its existence – but she joked how her father King George VI would become frustrated with his scrambler phone, modified by GCHQ to make his calls secret.

GCHQ’s director Jeremy Fleming, speaking at the agency’s former London home, told the Queen and invited guests: “Our work is not often glamorous or easily portrayed in film.

“But over the last 100 years it has saved countless lives, shortened wars, given Britain an edge, and solved or harnessed some of the world’s hardest technology challenges.”

Among the guests for the Queen’s unannounced visit were Alex Younger, chief of the Secret Intelligence Service (MI6) and known as “C”, and Andrew Parker, director general of MI5, the Secret Service.

Mr Fleming added: “It’s clear to us all that the world is changing at an unprecedented rate. It’s more interconnected than ever before.

“To keep up in this digital era – to optimise the potential of technologies like artificial intelligence and quantum computing – we know we need to keep reinventing.”

During her visit to the nondescript office block near Charing Cross station, the Queen met Ruth Bourne, 92, a former Bletchley Park code breaker.

When the subject of scrambler phones – used to keep important conversations confidential – was mentioned, the Queen said: “I remember my father had one, he used to get so cross when it didn’t scramble.

“Took some time to heat up and then work.”

The machines used valves, today replaced by transistors, which needed time to warm up before the equipment would work.