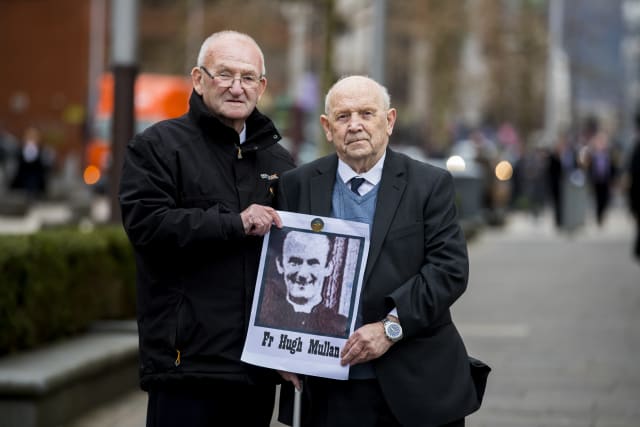 A man who survived a shooting in west Belfast in 1971 has told an inquest that he holds himself responsible for the death of a priest and a young man who went to his aid.

Bobby Clarke, 85, was hit by a bullet in the back near Springfield Park on August 9 as he tried to move a number of children out of the area.

Mr Clarke was giving evidence to the inquest that is examining the deaths of 10 people at Ballymurphy in 1971.

The sequence of events started after the introduction of internment in Northern Ireland that year on August 9. Mass arrests sparked rioting across the region.

Over three days, from August 9-11, ten people died in shootings at a number of locations in west Belfast. The events have become known as the Ballymurphy Massacre.

Mr Clarke was shot in an area close to Springfield Park known as the field.

He had taken a baby from the area and was returning across the field to take more away when he was hit in the back by a bullet.

Father Hugh Mullan crawled over the field to tend to him, waving a white cloth.

After ascertaining Mr Clarke was not seriously injured, he turned to leave and at this point was fatally shot, the inquest heard.

Another man, Frank Quinn, 19, was also shot dead as he attempted to reach Fr Mullan.

Mr Clarke told the inquest he has had 47 years of “living this” and holds himself responsible for the deaths of the two men.

“Two people lost their lives coming to help me while I was trying to help those who could not help themselves,” he told the inquest.

He said he saw two soldiers on the roof of flats on the Springmartin Road “tracking” him with their rifles as he crossed the field first with the child and then as he returned.

But Mr Clarke said he believes he was shot by soldiers who were at ground level on Springfield Park, and that they were members of the Parachute Regiment.

Soldiers have long been held responsible for killing the 10 people in Ballymurphy, but the accepted narrative became clouded last year when former UVF members came forward to claim their organisation was also involved.

Earlier in Tuesday’s inquest hearing another man who had been in the field during the shootings said he saw no gunmen in the area that evening other than three men he believed were soldiers, one of whom was armed with a rifle.

“No one who was on that field had any weapons, no one was a threat to anyone, and that’s the God’s honest truth,” Francis Corr told the inquest.

Mr Corr described lying on the ground and hearing bullets “thudding into the field” around him, adding that he felt the bullets were aimed at him.

When asked whether he would “cover for anyone”, such as gunmen firing at soldiers, Mr Corr replied: “No, I am here to tell the truth”.

Fresh inquests were directed into the Ballymurphy deaths following claims that the original coronial probes were inadequate.

They are the latest in a series of new inquests into incidents which took place during Northern Ireland’s troubled past.