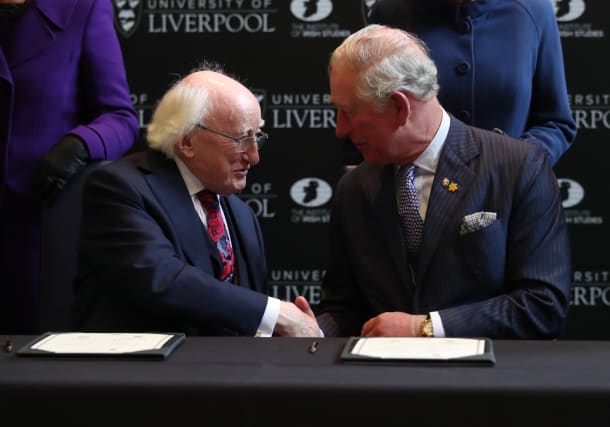 Irish President Michael D Higgins has called for the “warm relationship” between Ireland and the UK to survive whatever the outcome of the “Brexit odyssey”.

He also praised the Prince of Wales’s commitment to Anglo-Irish relations in a speech to a gathering of regional business leaders in Liverpool.

He paid tribute to the “unique, optimistic outlook and natural warmth” of Liverpool as he toured the city during the first overseas trip of his second term as president.

Mr Higgins and his wife Sabina renewed their friendship with Charles and Camilla when the foursome visited Liverpool University’s Institute of Irish Studies.

Speaking later during a business lunch, he said: “We cannot deny that we are on the cusp now of a potentially seismic shift in the structure of the trade and commercial relationships between Ireland and Britain and, of course, this brings reverberations within the island of Ireland, and through the Midlands and North of the UK.

“The uncertainty that exists, and that may continue to exist for some time, seems to offer an inevitable dampening effect on business links and investment decisions across borders that are currently frictionless, but where barriers to trade and co-operation may soon emerge.

“We must together face the uncertainty we are now confronted with, and endeavour to ensure, whatever the outcome of the Brexit odyssey, that the warm relationship, built on ties of family, friendship and shared interests, will endure and will grow.”

The president and the prince met at Liverpool’s Victoria Gallery and Museum to formally cement their roles as joint patrons of the Institute of Irish Studies.

Following protocol Charles and Camilla arrived first and waited patiently for Ireland’s head of state and his wife, and greeted them warmly when their limousine pulled up.

The institute’s foundations lie in the 1985 Anglo-Irish Agreement to encourage greater understanding between the two islands.

The foursome held a private meeting for around 15 minutes before chatting to guests at a reception including representatives from Liverpool Irish Centre, Irish Community Care (Merseyside), and Irish businesses along with students and academics from the institute.

In his speech to business leaders Mr Higgins highlighted the common ancestry between his homeland and the city: “It is the people of Liverpool and their unique, optimistic outlook and natural warmth which make this place what it is and sustain Liverpool’s energy and cultural creativity.

“And as you know, the very Irishness of Liverpool might just have something to do with that. Indeed, it has been claimed that up to three-quarters of all people here can easily claim Irish ancestry.”

Charles has toured Ireland every year since 2014 and the president highlighted his dedication to preserving ties between the two nations.

Mr Higgins, who is midway through a three-day tour of the UK, said: “The deep personal commitment of Prince Charles to Irish-British relations, combined of course with that of Her Majesty Queen Elizabeth, is truly exceptional.

“It speaks of the progress we have made as neighbours and friends over recent decades and following very challenging times.”