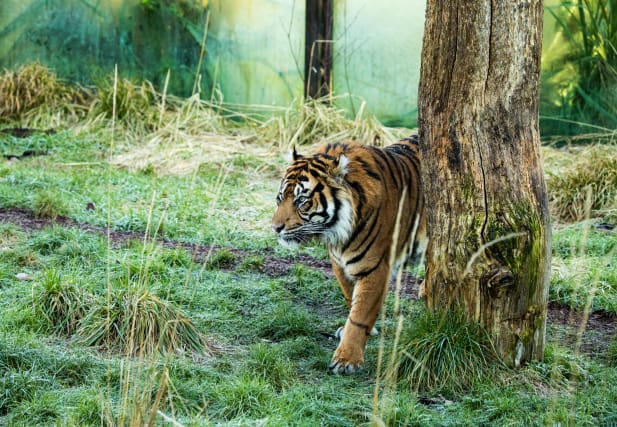 Staff at London Zoo used airhorns and fire extinguishers in a desperate attempt to stop a male Sumatran tiger from killing his potential mate, park bosses have revealed.

Melati, 10, was mauled to death by Asim, seven, when keepers allowed the pair to meet for the first time on February 8.

In a blog post shared on the zoo’s website, the former head nurse at the Royal Veterinary College explained that staff were on hand when the two animals were introduced, and that the encounter initially seemed to go to plan.

She said: “Fire extinguishers, airhorns, hoses and flares were at the ready to distract (the tigers) if the encounter took a dangerous turn.

“Initially everything about their meeting was as we expected.”

The tigers then reacted aggressively towards one another, and the tigress was killed, the zoo boss said.

Ms England added: “Part of tigers’ natural behaviour is territorial and aggressive, and they are strong and fast animals.

“In the blink of an eye, with no obvious provocation, they turned on each other and our years of experience told us it was beyond normal.

“Everyone sprang into action – lighting flares, sounding airhorns and setting off fire extinguishers and hoses.

“Unfortunately by the time Asim retreated the second time, Melati had been fatally injured.”

Ms England paid tribute to the rare animal, and added: “(Melati) captivated everyone who worked with her; she was beautiful, majestic, spirited – and every inch a tiger.”

The zoo announced Asim’s arrival from Ree Park Safari in Denmark, on January 29. He was moved to the UK as part of a European-wide conservation breeding programme.

He was described by head tiger keeper Kathryn Sanders as “a handsome, confident cat who is known for being very affectionate with the ladies in his life”.

“We’re hoping he’ll be the perfect mate for our beautiful Melani,” she added.

Sumatran tigers are described as critically endangered by the World Wildlife Federation, which estimates there are fewer than 400 in the wild.