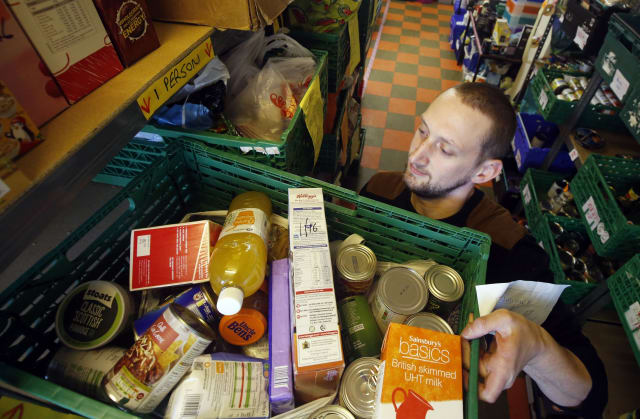 Work and Pensions Secretary Amber Rudd is facing calls to halt the roll-out of Universal Credit, after admitting that its introduction had increased reliance on food banks.

Answering questions in the House of Commons, Ms Rudd said it was “absolutely clear” there had been issues with the roll-out of the Government’s oft-delayed flagship welfare policy, which replaces a range of benefits with a single payment.

She told MPs that people being unable to access money after moving onto UC “led to an increase in food bank use”.

Downing Street did not distance itself from her admission, with Prime Minister Theresa May’s official spokesman saying the Government had “long acknowledged” problems with the initial introduction of UC.

But opposition parties said that Ms Rudd’s admission came too late for thousands of families who had suffered as a result.

“So why haven’t they stopped the roll out?”

Ms Rudd’s comment came in reply to a question from Labour’s MP for Washington and Sunderland West, Sharon Hodgson, who is co-chairing a Children’s Future Food inquiry.

Mrs Hodgson told the Commons her investigations into families struggling  to feed their children showed that UC was “making their situation worse not better”.

The Work and Pensions Secretary said: “We’re committed to a strong safety net where people need it.

“It’s absolutely clear there were challenges with the initial roll-out of universal credit and the main issue that led to an increase in food bank use could have been the fact that people had difficulties accessing their money early enough.

“We have made changes to accessing universal credit so people can have advances, so there is a legacy run on after two weeks of housing benefit, and we believe that will help with food bank use.”

Asked later whether Theresa May agreed with the Work and Pensions Secretary’s assessment, the Prime Minister’s official spokesman told a Westminster media briefing: “We have long acknowledged that there were issues with the initial rollout of Universal Credit.

“That’s why we have listened and made improvements, such as extending advances, removing waiting days and introducing Housing Benefit run-on.

“These changes are giving support to vulnerable people who need it most, while at the same time helping people get into work faster.”

Shadow work and pensions secretary Margaret Greenwood said that the initial wait for a UC payment after first claiming the benefit was “pushing many families into poverty”.

“It is no wonder that many people are being driven towards food banks,” she said. “It is astonishing that the Amber Rudd has admitted this link yet she has failed to take action on the five-week wait.

“Labour will completely overhaul our social security system so that it supports people instead of driving them into poverty.”

Liberal Democrat work and pensions spokeswoman Christine Jardine said: “This belated admission of responsibility comes far too late for the tens of thousands of people forced to rely on food banks because of the Conservatives’ stubborn refusal to fix Universal Credit.

“In 21st century Britain, no-one should be dependent on charitable handouts for their survival, yet that is precisely the situation that Government policy has created.”

“The Tories’ flagship welfare policy simply isn’t working, and it’s now abundantly clear that the welfare cuts inflicted by the Tories on people across Scotland are directly forcing vulnerable people into poverty,” he said.

“Experts and front-line services have been warning that that people are being left with nothing to live on for years.

“Only this uncaring Tory Government could deny that for so long.

“They should be deeply ashamed of themselves.”