‘No chance’ of May accepting Labour vision for Brexit, Leadsom claims 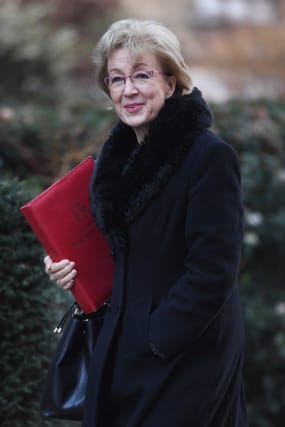 A Cabinet minister has insisted there is “no chance” of Theresa May accepting Labour’s vision for Brexit despite speculation the Prime Minister could soften her stance on customs union membership.

Asked in an interview with the Press Association if she would resign if the PM adopted Labour’s proposals for a customs union with the EU after Brexit, the Commons Leader said: “I’ve read the Prime Minister’s letter and I don’t think she’s softening her stance at all.

“I think she’s making quite clear that what Corbyn is demanding is actually not as good as what the Prime Minister’s deal is offering.

“I think there’s no doubt that what the Prime Minister is offering is better than what Corbyn is demanding, which simply begs the question, if they like it, why don’t they vote for it?”

Pressed again on the issue, Mrs Leadsom said there was “no chance” that Mrs May would adopt Mr Corbyn’s “view of the world”.

“We’re taking back control, we won’t be paying money over, free movement will end, and we will have our own independent free trade policy so I definitely don’t see the Prime Minister agreeing to Corbyn’s world view.”

The frontbencher refused to say what the cut-off date would be for the necessary legislation to get through the Commons to allow the UK to leave the EU as planned on March 29.

She said it was possible to pass Bills “quite quickly” with “good will” from the Commons and Lords, but added: “It’s just not possible to say how quickly it could be done, but obviously it depends on the way in which there is adequate debate on the meaningful vote and that’s what the Prime Minister is determined to do. (It) is to make sure that parliamentarians have had ample opportunity to look at the deal she’s putting forward before it comes to that meaningful vote.”

Mrs Leadsom’s comments came after Mrs May responded to Mr Corbyn’s letter last week setting out Labour’s terms for backing a deal, with an offer of further talks.

In her reply, released on Sunday night, the Prime Minister welcomed the Labour leader’s agreement that the UK should leave the EU with a deal and his support for finding “alternative arrangements” to the Irish backstop.

However she questioned his support for a customs union with the EU, saying it would prevent Britain from striking free trade deals with other countries around the world.

There has been concern among Conservative Brexiteers that the Prime Minister could concede too much ground to Labour in an attempt to win cross-party backing for a deal with Brussels.

Downing Street meanwhile said Mrs May will make a Commons statement on the latest developments in the Brexit negotiations on Tuesday – a day earlier than expected.

The Prime Minister’s official spokesman said it would give MPs more time to “digest the content” ahead of a series of expected Commons votes on Thursday.

Mr Fox, in Bern for the signing of a trade agreement with Switzerland, said Labour claims they would be able to influence EU trade policy showed they did not understand how EU policy worked.

“The idea that you can have a customs union with the EU and at the same time, as an outside country, have an effect on EU trade policy, is to not understand the EU treaties.

“It is very clear from the European Union that non-EU members do not have a say in EU trade policy so to pretend that you could do so is a dangerous delusion.”

His intervention came after Treasury Chief Secretary Liz Truss refused to rule out resigning if Mrs May backed a customs union.

“I absolutely do not think that should be our policy,” she told Sky News on Sunday.

Mr Johnson, who led the official Vote Leave campaign in the referendum, warned the Prime Minister against trying to do a deal with Labour to get her agreement through.

“I don’t think that there is any mileage for the Prime Minister or the Government in trying to do a deal with Labour because they will just try to trap Theresa May,” he said at a launch event at Westminster.

“They will just try to do a deal that is toxic.”