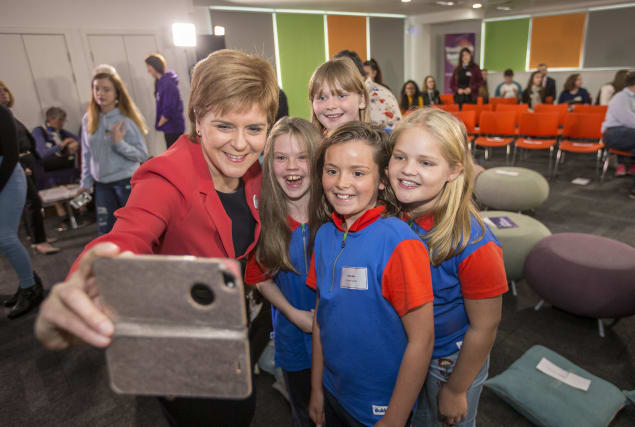 Nicola Sturgeon will face questions from children as a youth version of First Minister’s Question Time returns in April.

Around 100 youngsters will take part in First Minister’s Question Time: Next Generation, on which they will have the opportunity to ask her about issues they care about.

National charities Children in Scotland and YouthLink Scotland are again leading the project, with STV returning as media partner.

Ms Sturgeon also revealed her fear of dogs, how she was bullied at school and that the person she would walk 500 miles for is her husband.

Ahead of the second event, she said: “Scotland’s Year of Young People in 2018 was a great opportunity to strengthen young people’s voices and give them a platform to be involved in decisions that will affect them.

“This commitment continues through events such as FMQT, ensuring the rights of children and young people remain at the heart of Scottish life – and ensuring they have the chance to shape the future of the Scotland they want to live in.”

Children and young people have been involved in co-designing FMQT: Next Generation as behind the scenes decision-makers, choosing everything from the look of the event to the choice of questions asked.

Jackie Brock, chief executive of Children in Scotland, said: “The first FMQT: Next Generation made absolutely clear that young people are central to the debate about the kind of country we want Scotland to be.

“We’re very much looking forward to seeing how they use this exciting next opportunity with the First Minister to talk about what’s important in their lives, articulate their priorities and speak truth to power.”

The programme will be recorded on Tuesday April 23 and streamed to audiences across Scotland, while broadcast details are still being finalised.

Children in Scotland and YouthLink Scotland are calling for young people to submit questions to be asked at the event, with more information available at childreninscotland.org.uk and youthlinkscotland.org.

Tim Frew, chief executive of YouthLink Scotland, the national agency for youth work, said: “FMQT: Next Generation is a real legacy from Year of Young People and goes right to the heart of making sure our children and young people’s views are listened to.

“The project gives children a powerful platform to share their experience, push for change and lay down challenges in a way that adults would never think of.”