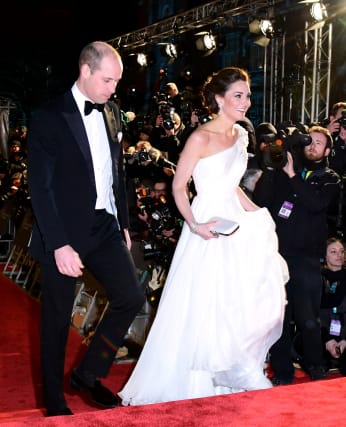 The Duke and Duchess of Cambridge were cheered onto the red carpet at the Bafta film awards.

Kate was dressed in a white one-shouldered Alexander McQueen dress with a floral motif while William wore a black dinner suit.

The duke, who is the president of Bafta, will present its highest accolade, the Fellowship, to film editor Thelma Schoonmaker during the ceremony.

Fans who had gathered outside the Royal Albert Hall in central London screamed as the royal couple walked side-by-side into the ceremony on Sunday evening after making the short journey from Kensington Palace.

They were greeted at the entrance by the Royal Albert Hall’s chief executive Craig Hassall before making their way to their seats.

The entire crowd rose to their feet to welcome the royal couple into the ceremony, which is being presented by Joanna Lumley, and stayed silent as they made their way down to their places in the front row of the auditorium.

They were the last to take their seats and were introduced to the audience by the announcer.

The duke has been president of the academy since February 2010.

The Duke and Duchess of Cambridge have attended the awards ceremony in previous years.