Tony Blair has reiterated his warnings on the consequences of a no-deal Brexit, saying it could be "devastating" for the Northern Ireland peace process.

The former prime minister said no deal will inevitably lead to a "really hard border" on the island of Ireland and cause a huge split within the UK.

Mr Blair – a vocal advocate of the UK remaining in the EU – said he believed a second Brexit referendum might happen "when people see what the true Brexit alternatives are".

The former Labour leader told Sky News' Sophy Ridge On Sunday: "No one could responsibly propose (a no-deal Brexit). It would be economically very, very dangerous for Britain, and for the peace process in Ireland it would potentially be devastating.

"You would have a hard border, very hard border. A no-deal Brexit means a really hard border between north and south in Ireland, it's contrary to the Good Friday Agreement and it will cause an enormous fissure within the United Kingdom." 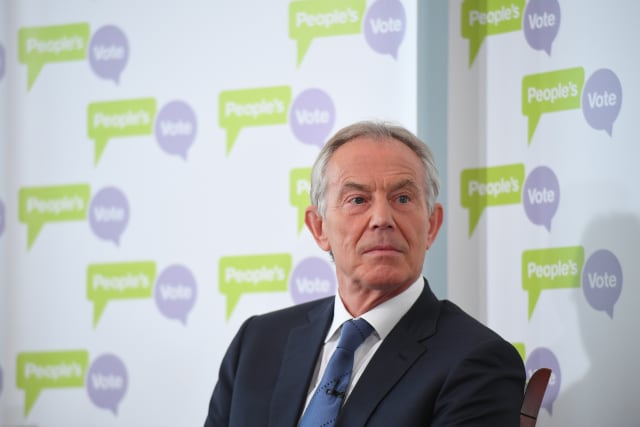 Mr Blair, who has argued strongly for a second EU referendum, added: "I've never thought that you would get to another referendum going directly to it – you'll get to it when people see what the true Brexit alternatives are. And the truth is there are two.

"You can have a soft Brexit, which is really what Jeremy Corbyn is suggesting, or you can have the hard Brexit that Boris Johnson and Nigel Farage and other people want."

He said the type of Brexit must be decided before the UK leaves the EU, arguing that a lack of clarity would lead to a lack of "closure".

The full interview is on Sophy Ridge On Sunday at 9am.