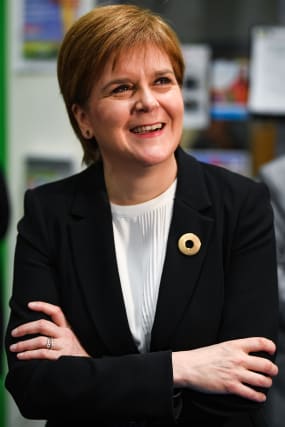 The First Minister has been promoting Scottish business links with North America, during her tour of the continent.

The company employs 1,550 people in Scotland and is a key part of the country’s financial services industry.

Ms Sturgeon also addressed a Scotland Is Now investor lunch, hosted by IBM, where around 50 business people heard about Scotland’s strengths and assets as an investment location and trading partner.

When in Washington DC, the First Minister met representatives from Verdant Power and the technology firm Leidos.

She also met Arne Sorenson, CEO of Marriott International, to discuss its further expansion of hotel operations in Scotland and addressed the Global Women’s Innovation Network, which will be visiting Scotland later this year.

In Canada, the First Minister hosted an event to launch the Scotland Is Now campaign.

Its aim is to encourage people to work, study, invest, visit and live in Scotland.

As well as championing food and drink exports, she set out the potential of Scotland to the Toronto Stock Exchange, met representatives of the Toronto Region Board of Trade and toured MaRS Discovery District to share learning on how to further boost entrepreneurial and start up activity in Scotland.

She said: “North America is one of Scotland’s most important trading partners around the world, with the US alone being our most valuable export market with an estimated £5.5 billion of exports in 2017.

“It’s been invaluable to have the opportunity to speak directly with representatives of many of the US and Canada’s leading businesses and sectors, making clear the many benefits Scotland has to offer as a business location.

“It has also been hugely important to meet existing investors and partners to discuss how we can work together through the challenges ahead.

“With Brexit continuing to pose the biggest threat to our economy, it is vital that we do all we can to promote Scotland as a great place to establish yourself and invest in, and show we remain very much open for business.”

A total of £6.1 billion of Scottish goods and services were exported to North America in 2017.