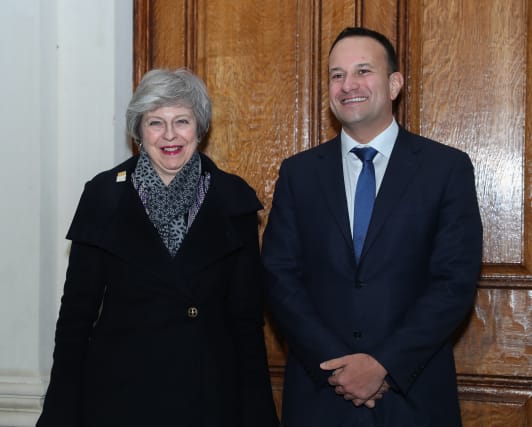 Theresa May has been given a warning by senior Tories that the “monumental” problems with her Brexit plan cannot be solved by “cursory tweaks”.

The Prime Minister is seeking changes to the backstop measure to prevent a hard border with Ireland but was told by former Cabinet ministers that may not be enough to win support in Westminster.

The ex-ministers – Remainer Nicky Morgan and Brexiteers Iain Duncan Smith and Owen Paterson – have been taking part in talks to find an alternative to the backstop following a Commons vote in favour of replacing the measure.

“The backstop in anything like its present form is simply never going to pass the Commons,” they wrote in the Daily Telegraph.

Their intervention came after Mrs May held talks in Dublin with Taoiseach Leo Varadkar.

She was joined for the private dinner at official state guesthouse Farmleigh House by the UK’s Brexit negotiator Olly Robbins and her chief of staff Gavin Barwell.

Mr Varadkar stressed that no official negotiations would take place over the smoked salmon and fillet of beef, but instead the meal presented an opportunity to “share perspectives” on Brexit.

Mr Varadkar said: “I believe ultimately we are going to have to get this deal over the line and I am determined to do that.”

Mr Cox has been leading work within Whitehall on providing either a time limit on the backstop or giving the UK an exit mechanism from it.

Both proposals have been rejected by Dublin, which insists the backstop cannot be time-limited if it is to provide an effective “insurance policy” against the return of a hard border between Northern Ireland and the Republic.

And the MPs involved in talks on the so-called Malthouse Compromise stressed that the Prime Minister had been instructed by the Commons to replace the backstop rather than merely seek changes to it.

Writing in the Telegraph Ms Morgan, Mr Duncan Smith and Mr Paterson said: “It is almost as if the Prime Minister has forgotten the scale of the original Withdrawal Agreement’s defeat (by 230 votes) or how unacceptable the backstop proposals remain to significant numbers of MPs on both sides of the House.”

Meanwhile, the Financial Times reported that trade talks with Japan on a post-Brexit deal had stalled.

The newspaper said Tokyo has agreed to extend the existing terms for the duration of a transition period if the UK strikes a deal with Brussels – but in a no-deal Brexit UK-Japan trade would be on World Trade Organisation rules.

A Department for International Trade spokesman said: “Our priority is to avoid disruption to businesses as we leave the EU and more DIT staff have been allocated to no-deal planning.

“The Japanese Prime Minister and Theresa May agreed this January both countries would work quickly to establish a new economic partnership between Japan and the UK using the basis of the EPA.”