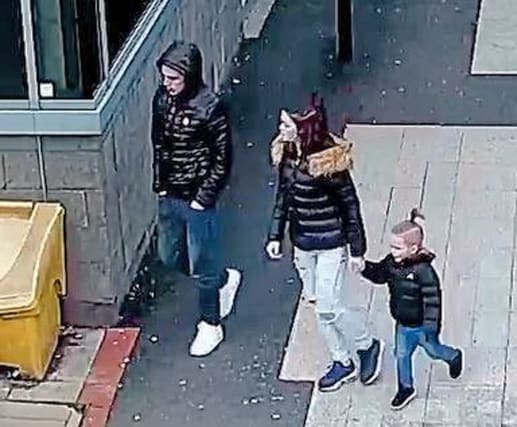 Tragic Alfie Lamb was caught on camera running to keep up with his mother just minutes before he was allegedly crushed by a car seat.

The three-year-old’s last steps were recorded on CCTV during a shopping trip to Sutton, south London, on the afternoon of February 1 last year.

On the journey home to Croydon, Alfie collapsed in the footwell of an Audi convertible and died in hospital days later.

Stephen Waterson, son of former government minister Nigel Waterson, is accused of twice pushing his car seat into Alfie while his mother Adrian Hoare allegedly failed to stop him.

Giving evidence, Hoare, 23, told jurors how her boyfriend had been “annoyed” with her son and said: “I will not be told what to do by a three-year-old.”

There were four adults in Waterson’s car that day, as well as two children who were forced to sit in the footwell.

Jurors were shown footage of 3ft Alfie appearing to run to keep up as the group set out from Halfords car park in Sutton and later returned with their shopping.

Cross-examining Hoare, Duncan Atkinson QC, asked: “Whose pace are you walking at? What allowances were you making for Alfie’s little legs? Why is Alfie having to run?”

The defendant replied: “It’s just the way I walk even if it’s just me and Alfie. Alfie always runs.”

Mr Atkinson went on: “Until he got into that car on the way back from Sutton, he was fine wasn’t he?

“And by the time that the car reached Adams Way he was very far from fine, wasn’t he? Something had to have happened in that journey?

“So when doctors and police start saying something happened to Alfie, you knew it had to have happened in the car. Were you not thinking it must have been Stephen?”

Hoare replied: “Not straight away.”

The prosecutor asserted: “What Stephen had done with his seat he had done deliberately. He was annoyed the second time he moved his chair back?”

Hoare agreed, but added: “To begin with I did not blame anyone for what happened.”

Mr Atkinson said: “Was it your relationship with Stephen was just too important?

“Wasn’t the reality you just put what Stephen wanted first?”

Hoare told the court that Alfie had travelled in the footwell of a car before.

Mr Atkinson said: “On this journey from Sutton to Croydon he was saying he did not have enough room and you had responded by slapping him?”

The lawyer asked: “He’s crying, he’s unhappy, he’s calling for his mum. Why not pick him up and comfort him, Miss Hoare?

“When Stephen moves the car seat back a second time why didn’t you pick him up then? Alfie was crying, he was screaming, he was coughing.”

Hoare replied: “I would not have been able to get Alfie out of the space because he had not moved his chair.”

Mr Atkinson said: “Wasn’t it obvious that he did not have enough room?”

The defendant said: “I would have found a way of moving Alfie out of the space if I thought there was a serious problem and Alfie couldn’t breathe.”

Mr Atkinson said: “On February 1 last year, looking back on it now, do you feel you let Alfie down?”

The prosecutor said: “You could have kept your son out of that footwell, couldn’t you?”

The defendant said: “Yes, but Stephen said we was all going together.”

Earlier, Waterson’s lawyer Tana Adkin QC suggested Waterson’s chair had nothing to do with Alfie’s injuries, saying Hoare must have “done something”.

She asked Hoare: “Are you trying to cover up something you did in the back of the car, and now trying to say it was Stephen that moved the seat and you knew what happened?”

Hairdresser Hoare, who is originally from Gravesend in Kent, denies manslaughter, child cruelty and common assault on Emilie Williams, who was in the car.

Waterson, 25, has pleaded not guilty to manslaughter and intimidation of the driver Marcus Lamb.