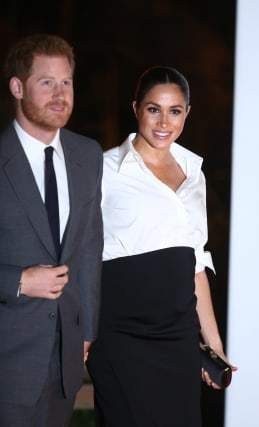 The Duke and Duchess of Sussex were all smiles at an awards ceremony honouring military veterans – a day after it emerged Meghan had made an emotional plea to her father to stop his “victimising”.

Harry and Meghan were guests of honour at the Endeavour Fund Awards honouring those who, despite life-changing injuries, accidents or illnesses, have excelled in a sporting or adventure challenge.

Cradling her baby bump the heavily pregnant duchess, who wore a Givenchy outfit, met nominees alongside her husband at the historic Drapers’ Hall in the City of London.

Harry and Meghan chaired the judging panel which deliberated over who would receive the three awards – recognising achievement, celebrating excellence, and the third named in memory of adventurer Henry Worsley, who died trying to complete the first unsupported crossing of the Antarctic.

Close friends of the duchess have spoken to a US magazine in support of Meghan to counter the “global bullying” directed at the royal.

One of the five unnamed women told People magazine: “Meg has silently sat back and endured the lies and untruths.”

Another friend said the duchess had penned a message to her father Thomas Markle after she married Harry in May last year, pleading with him to stop his public criticisms.

Meghan’s confidante told the magazine: “After the wedding she wrote him a letter. She’s like, ‘Dad, I’m so heartbroken. I love you. I have one father. Please stop victimising me through the media so we can repair our relationship.’”

Since its launch in 2012, the Endeavour Fund has supported 86 different projects that have helped more than 5,000 wounded, injured and sick servicemen and women