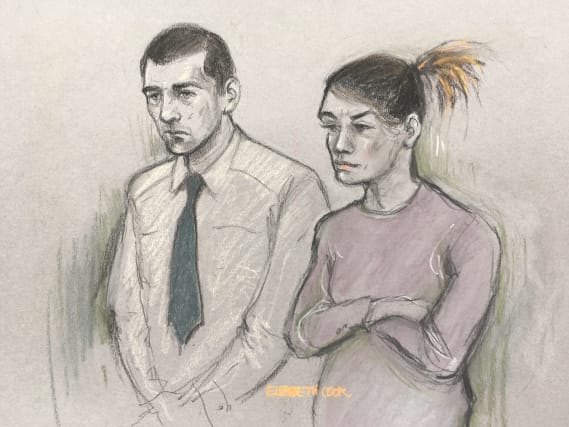 A mother whose little boy was allegedly crushed by a car seat has told jurors she was “scared” of her boyfriend and felt “little” when he bragged about his important family.

Adrian Hoare, 23, is accused of doing nothing when 25-year-old Stephen Waterson allegedly squashed her three-year-old son Alfie Lamb during a trip in his Audi convertible last February.

Waterson, who is the adopted son of ex-government minister Nigel Waterson, is accused of deliberately moving his seat back because he was annoyed at Alfie’s crying.

Giving evidence at the Old Bailey, Hoare said she felt “scared” when her partner was “annoyed or angry”, adding: “You never knew how he was going to react to things.”

The hairdresser told jurors how police had been called after an incident in Gravesend, Kent, the year before Alfie died.

She said she had been at a friend’s house when she heard Waterson had been seeing another woman.

“I asked him over the phone what was going on and we started arguing. He had come down to Gravesend in the car and asked me to go and speak to him.

“I had gone to speak to him and he had said that to me to get in the car. He started driving stupidly and he was shouting at me (that) he did not care if he killed us in the car.

“He was driving at speed and he did not care if there was other cars coming towards him or anything,” she said.

Katy Thorne QC, defending, asked: “When he said he did not care if he killed us, who was us?”

Hoare replied: “I had just found out I was pregnant at the time. He was saying himself, me and the baby.”

She went on: “I was scared and I eventually got him to stop the car. He then took me back down to near where my friend’s car was and went back to her house to speak to the police. My friends had been ringing Stephen’s phone trying to get him to take me back to the house and saying they would ring the police if he didn’t.”

Ms Thorne asked Hoare if she knew Waterson’s family had “some important jobs”.

Hoare replied: “He used to put it in conversation, yeah.”

Asked how it made her feel, she said: “Little compared to him but I didn’t really have anything.”

Hoare described Alfie as “like any normal three-and-a-half-year-old boy”.

The defendant, who had a troubled upbringing in Gravesend, said: “He could be naughty. He would try to climb about. He had a good imagination.”

Hoare said she used to call Alfie her “little noodle” and “fat pants”, while Waterson used the nickname “Tarzan”.

On February 1 last year, Alfie was captured on CCTV running around and holding his mother’s hand.

Hoare said Alfie had been happy on the shopping trip but began getting tired and “stroppy”.

On Waterson’s relationship with her son, Hoare said: “There had been times that Stephen had told him not to do something or he would tell him to be quiet and Alfie would not listen so he had got annoyed with him sometimes.”

Hoare denied she had hit her son, but said both she and Waterson would “tap” his hand.

She told how she met Waterson in 2016 after she moved to Blackpool for a fresh start.

Her previous boyfriend was jailed for setting fire to her house in Gravesend, jurors were told.

Waterson had a “big personality” and was “nice” but did not like her speaking to other people, she said.

Hoare suspected he had been unfaithful with various women during their relationship.

But she said: “When I confronted him with it, he said I was being silly, I was being paranoid.”

Hoare and Waterson, of Croydon, south London, have denied manslaughter and the trial continues.