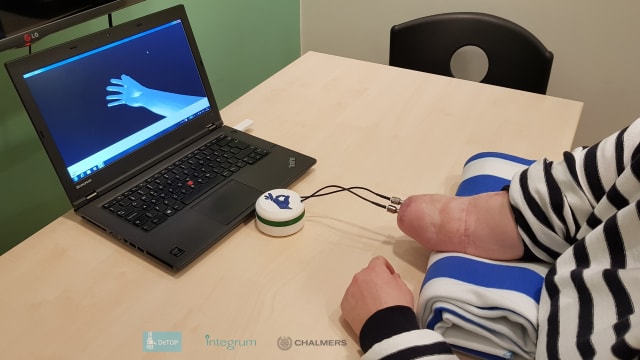 The hand offers a greater degree of sensitivity combined with a fully rechargeable battery, scientists say.

It is also the first of its kind to be suitable for people who have had an amputation below the elbow.

Previous bionic hands have sometimes relied on a large computer which the recipient needed to carry in a backpack.

But the latest design has all these elements incorporated into the hand.

An international team of experts, including from the University of Essex, collaborated on the project, which involved the patient having 16 electrodes implanted in her upper arm.

Conventional prosthetic hands rely on electrodes placed over the skin to pick up control signals from the underlying stump muscles.

But these are unreliable and only enable control over a few movements such as opening and closing the hand.

Experts have now implanted electrodes in remaining muscle in the stump instead, which deliver richer and more reliable information.

This results in the patient having greater sensation and control over the hand.

Dr Luca Citi, from the University of Essex’s Brain-Computer Interfaces and Neural Engineering Laboratory, said there was now a direct mechanical connection with the bones, making the hand feel much more part of the body than previous models.

“This is a take-home hand,” he told the Press Association. “We detect the electrical signal that the brain is sending to control the hand.

“We detect that signal and we do some number crunching to make sense of those signals, realising that a specific pattern of signals relates to a specific function that the patient is trying to perform.

“We tried to take an approach where we were making sense of the neurosignal to restore movement in a natural way.

“So the patient does not need to specifically think about what to do, they can use the hand in a more natural way.”

It’s not as good as a real hand but it’s good enough for people to be able to go about their daily lives.

The woman, who does not wish to be named, is now learning how to control her new hand using virtual technology.

Two more patients will be implanted with this new generation of prosthetic hands in the upcoming months, in Italy and Sweden.

The new implant technology was developed in Sweden by a team led by Dr Max Ortiz Catalan at Integrum AB and Chalmers University of Technology.

He told the Press Association that researchers had been trying to work out how to move the expertise from the laboratory into people’s everyday lives.

He said: “The main issue has been how do we get all this technology and interface reliable enough for the patient to just go about their daily life.

“This new technology is much more reliable – electrodes have been placed inside in all the muscles available and also in the nerves to provide sensory feedback.”

He said the woman needed to re-learn how to use the hand using virtual technology and also needed to increase her strength but predicted:  “In a few months, she will be ready to take the hand home.”

He said thousands of patients could potentially benefit in the future, adding: “It’s not as good as a real hand but it’s good enough for people to be able to go about their daily lives.”

The NHS Nightingale – how big is it, who will it treat and why the name?