Soldier gutted to be sent to isolated Army base, mother tells inquest 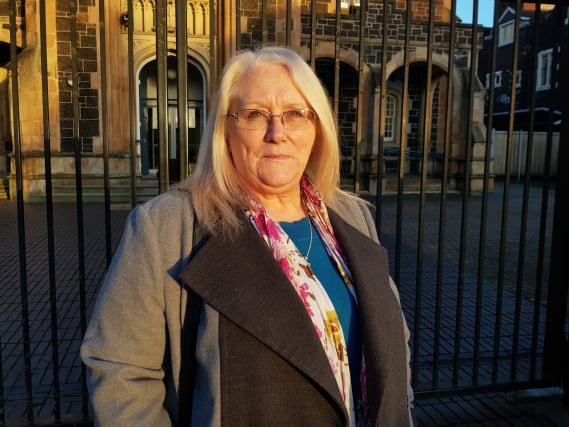 The mother of a soldier who died at an “isolated” Army barracks in Co Down shortly after serving in Afghanistan has questioned his posting there.

Lance Corporal James Ross, 30, from Leeds, was found hanged in a suspected suicide on December 8 2012 at Abercorn Barracks at Ballykinler.

Three months later, Rifleman Darren Mitchell, 20, from London, was also found hanged at the base.

Both had recently served in Afghanistan.

An inquest is taking place into their deaths at Ballymena Courthouse in Co Antrim.

Linda Ketcher said she did not believe it was acceptable that young men who had served in Afghanistan were sent to “isolated” barracks such as Ballykinler.

She said her son was “gutted” to be posted there and not closer to home after his second tour of Afghanistan from October 2011 to April 2012.

Mrs Ketcher said he confided in her about some incidents which upset him.

One involved a badly injured young girl, which she said he had found very distressing and had stayed with him.

“An Afghan man came running towards him carrying something in a blanket,” she told the inquest.

“As he approached the man opened the blanket, a little girl was in there who was badly injured.”

She described how he tried to help the child before alerting the medics to help her.

L/Cpl Ross’s sister Helen Thomas also gave evidence to say he was disturbed by this incident as the girl had reminded him of his niece and nephew.

Mrs Ketcher also questioned why there were two incidents where young men appeared to take their own lives within three months at Ballykinler.

“We are asking is there adequate care there?” she said.

She said her son found Ballykinler to be a cold and isolated place, and tried to keep himself busy by keeping fit and taking a number of courses.

But she said he was happy in his career and very pleased at his recent promotion to lance corporal.

“He found a career that he loved and was progressing well at it,” she said.

Mrs Ketcher said her son had been making plans to come home for a late Christmas and spend New Year’s Eve in Paris with his girlfriend.

She told the inquest that he had cancelled leave for Christmas to allow others with families and children to get it instead.

Mrs Ketcher said he told her to keep his presents under the tree so they could celebrate a late Christmas together.

She said she last heard from her son on the Thursday before he died and they talked about a driving course he was to do.

“There was no sign that anything was wrong,” she told the inquest.

The inquest also heard from two of L/Cpl Ross’s friends, who said they received unusual phone calls from him in the weeks before he died.

Giving evidence via video link from a Leeds court, Emma Jackson said he told her that he was not enjoying being based in Northern Ireland, saying there was “nowt to do”, adding that overall he seemed bored.

The inquest heard that due to security concerns, soldiers were unable to socialise in nearby towns and instead had to go to Belfast or Lisburn, a trip that cost £40 each way in a taxi.

Mrs Jackson said L/Cpl Ross told her that he had been demoted after taking a group of junior ranked men for a run on the beach in Ballykinler and a swim in the sea.

“It didn’t make sense. I didn’t think he seemed very well, seemed quite manic and was not listening to me,” she told the inquest.

“Whatever the truth of what had happened, I have no doubt he genuinely believed he had been demoted.”

She added that she was surprised when she attended his funeral that he was buried as a lance corporal.

James Kerr gave evidence to the inquest via a statement that L/Cpl Ross told him over the phone that they were “going to take his stripe off him”.

He said during the phone call L/Cpl Ross had told him he had made men do press-ups in the sea.

Mr Kerr added that he felt it was a “bit harsh to be demoted for that”.

The last resident battalion moved out of Ballykinler in 2014.