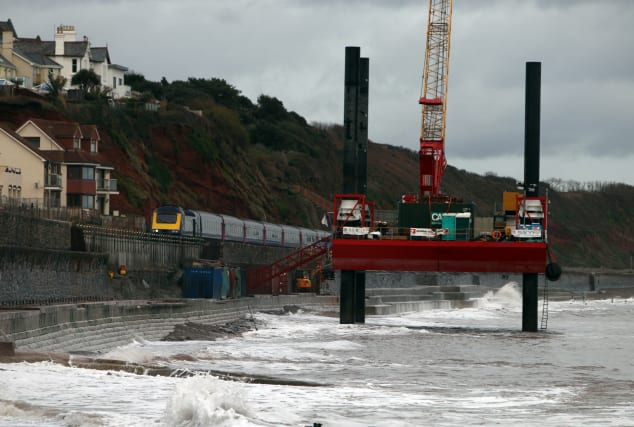 Plans have been unveiled to build a new sea wall to protect an iconic coastal railway connecting Devon and Cornwall with the rest of the UK.

There have been ongoing problems with the rail line at Dawlish, on the south Devon coast, since the sea wall collapsed during storms in 2014 and the track was washed away.

Owing to high waves and strong winds, the tracks and station are regularly being damaged by flooding.

Network Rail is submitting a planning application to Teignbridge District Council to improve the long-term resilience of the railway by building a new sea wall.

After the 2014 storm, Network Rail carried out a series of studies which concluded maintaining the current route was the most feasible and cost-effective solution.

Mark Langman, Network Rail’s western route managing director, said: “The Department for Transport and Network Rail have been working tirelessly to determine what needs to be done in order to protect this vital transport artery for Devon and Cornwall.

“From blank page studies that looked at all options we’ve identified this as the most feasible rail route for Devon and Cornwall and there are areas that specifically need our attention.

“Improving the resilience of the sea wall at Dawlish is one of the most immediate and easiest areas we can begin work on and we’ve now submitted detailed plans to Teignbridge District Council.

“These plans are now subject to the views of the council, their residents and a final decision from government.

“In parallel we continue to work on possible solutions at Holcombe and Parsons Tunnel and will be sharing these with the community later this year.

“Maintaining this vital rail link for Devon and Cornwall remains a high priority for us, as I know it is for the Government.”

The western route between Exeter and Newton Abbot, which was established by Brunel in 1846, is one of the most iconic railway lines in Britain.

Business leaders estimated the British economy lost up to £20 million every day the line was shut in 2014.