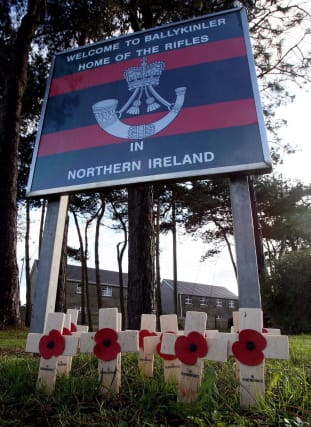 An inquest into the deaths of two British soldiers at their barracks is due to begin later.

James Ross and Darren Mitchell died in suspected suicides within three months of each other at Ballykinler in Co Down, and their families have claimed they had nobody to turn to with their problems.

Their inquests are due to open in Ballymena, Co Antrim, on Monday morning and will examine whether there was a lack of support for military personnel.

Lance Corporal Ross, 30, from Leeds, and Rifleman Mitchell, 20, from London, who both served in Afghanistan, died within three months of each other in 2012 and 2013. Both were found hanged.

They had previously been on active service with 2nd Battalion the Rifles.

An additional eight incidents of serious self-harm involving other soldiers in the same unit were recorded over a six-month period within which the men died.

A preliminary hearing of the inquest was told a colleague described Ballykinler barracks as “Bally Kill Yourself”.

Written evidence before counsel for the victims’ families disclosed that L/Cpl Ross had discussed the loss of personnel during overseas combat.