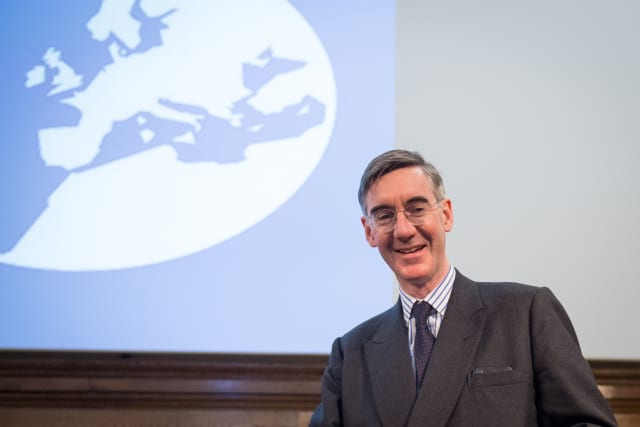 Jacob Rees-Mogg has signalled that he may be willing to accept a short delay to Brexit if it is required to finalise legislation around a deal.

The leading Brexiteer said a brief extension to the Article 50 period, which is currently due to end on March 29, “is not impossible” if needed for Parliament to complete scrutiny of a withdrawal agreement.

However, Mr Rees-Mogg insisted that such a delay must not be used for further “vacuous negotiations” with Brussels.

The chairman of the European Research Group of Leave-supporting Tories indicated his support for a limited delay after Foreign Secretary Jeremy Hunt warned extra time would be needed to pass laws if MPs approve a deal at the eleventh hour.

Earlier this week Theresa May secured Parliament’s backing to go back to Brussels in hope of hammering out a fresh agreement that does not include the Irish border backstop – which is unacceptable to the DUP and Brexiteer Tories – and which will command a majority in the Commons.

The Prime Minister is due to report back to Parliament on her negotiations with the EU on February 13, with a further series of votes by MPs expected the following day.

Wrangling in the Commons has seen backbench MPs put forward a range of alternative plans to find a way out of the morass.

They include amending legislation to delay Britain’s scheduled departure from the EU and avoid a no-deal Brexit which some consider would be damaging.

“Attempts to postpone the date of departure from the European Union beyond March 29 are little more than ploys to keep the United Kingdom as a member state in spite of the referendum and subsequent Acts of Parliament,” Mr Rees-Mogg said.

However he accepted that, with 55 days left till Brexit day, the timetable is “tight” and if a deal is struck and laws of such magnitude will demand proper scrutiny.

“Thus, if the agreement were made but a little parliamentary time were needed, as long as the second reading had taken place a short extension is not impossible,” he said.

“Equally, to delay for the purpose of vacuous discussions would be solely to thwart Brexit. It must not be for that purpose and should be opposed if negotiations are incomplete.”

Mr Rees-Mogg has backed the so-called Malthouse Compromise, drawn up by MPs from the Tories’ Remain and Leave wings, as a means of getting a deal through Parliament.

This would see the backstop removed and replaced with a free trade agreement that would avoid the need for a hard border in Ireland.

Eurosceptics would also agree that the implementation would last for an extra year, Mr Rees-Mogg said.

He added that if the EU rejects the plan then Britain would leave without a deal, but with a “purchased implementation period” that would give until 2021 for the UK and EU to either begin trading on World Trade Organisation (WTO) rules or strike a new agreement.

Reports have suggested Mrs May could face a wave of resignations by pro-Remain ministers if she does not rule out a no-deal Brexit when she returns to Westminster from Brussels in a fortnight’s time.

In an interview with the Financial Times published on Saturday, Work and Pensions Secretary Amber Rudd said she felt no-deal would be a “bad outcome and I feel we are getting too close to it”.

“I’m concerned it could happen by mistake. The Government and all MPs have a responsibility to try to stop that,” she said.

A range of dire predictions have been made about the potential consequences of Britain crashing out of the EU without a deal next month.

On Saturday The Guardian reported that Environment Agency officials have raised concerns internally over the potential for a backlog of waste if export licences become void overnight on March 29.

Mary Creagh, chairwoman of the Commons Environmental Audit Committee, told the paper: “The UK’s waste and recycling system is already fragile but these shocking emails show it will grind to a halt if customs checks and WTO tariffs prevent the export of millions of tonnes of waste.”