May: I’ll battle for Britain when I go back to Brussels for new Brexit deal 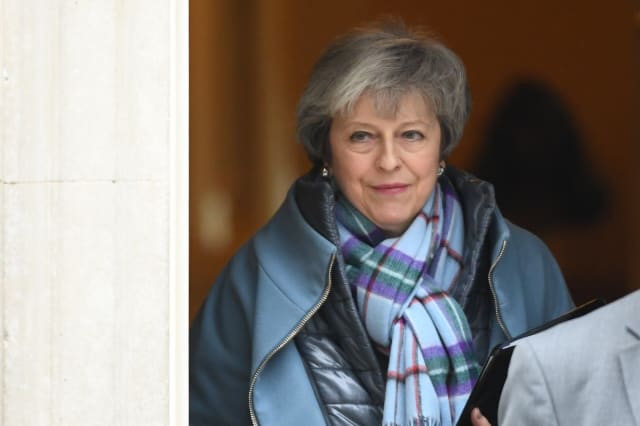 Theresa May has said she will be “battling for Britain” when she returns to Brussels to seek a “pragmatic” Brexit deal that can win over both the European Union and her own MPs.

Writing in the Sunday Telegraph, she suggested that Labour leader Jeremy Corbyn had agreed with her that the Irish border backstop as set out in the Withdrawal Agreement had to change.

It came after a report claimed that Nissan was preparing to scrap plans to build its X-Trail 4×4 at its Sunderland plant.

Opponents to Brexit were quick to seize on the Sky News claim, which the firm said it would not comment on.

In the Sunday Telegraph, Mrs May said she was listening to figures from across politics, the trade union movement and business in her quest for a feasible Brexit compromise.

She said: “It’s why when I return to Brussels I will be battling for Britain and Northern Ireland, I will be armed with a fresh mandate, new ideas and a renewed determination to agree a pragmatic solution that delivers the Brexit the British people voted for, while ensuring there is no hard border between Northern Ireland and the Republic of Ireland.

“That is what Parliament instructed me to do on Tuesday night.

“Although Jeremy Corbyn didn’t vote with us, he also believes the potential indefinite nature of the backstop is an issue that needs to be addressed with Brussels. That is exactly what I’m doing.”

Last week Mrs May secured Parliament’s backing to go back to Brussels in the hope of hammering out a fresh agreement that does not include the Irish border backstop – which is unacceptable to the DUP and Brexiteer Tories – and which will command a majority in the Commons.

The Prime Minister is due to report back to Parliament on her negotiations with the EU on February 13, with a further series of votes by MPs expected the following day.

Wrangling in the Commons has seen backbench MPs put forward a range of alternative plans to find a way out of the morass.

Mrs May found herself with some rare good news on Sunday after a new opinion poll suggested the Tories had moved into a seven-point lead over Labour.

The Opinium poll for the Observer found that Jeremy Corbyn’s party had fallen from 40% to 34% since the key Commons votes on the mechanics of Brexit took place, falling behind the Tories who went from 37% to 41%.

His disapproval rating is 61% and he has support from little more than four in 10 Labour voters (42%), according to the poll.

But Downing Street denied reports in the Mail on Sunday that Mrs May’s team are planning for a general election on June 6 – the 75th anniversary of D-Day.

Mr Corbyn used a trip to Scotland to call again for a snap election.

Speaking on a visit to charities in Glasgow, he said that “the people who are bearing the brunt of nine years of austerity cannot wait years for a general election”.

His deputy John McDonnell had earlier accused the Prime Minister of trying to get pro-Brexit Labour rebels to “sell their votes” in a “dangerous” bid to win support for her deal.

The shadow chancellor claimed reports Theresa May might offer incentives to pro-Brexit backbenchers was the latest example of what he called the Conservatives’ use of “pork barrel” politics, following its post-election spending deal with the DUP.

Mr McDonnell also said talk of such “contractual” arrangements, first reported in the Times, pledging investment in the constituencies of MPs who back Mrs May’s deal, was “dangerous for our democracy”.

On a visit to Stoke-on-Trent on Saturday, he said: “I don’t think any MP will sell their votes in that way – that sort of bribery and corruption.”

Whitehall could be overwhelmed by a no-deal Brexit with the Department for Transport (DfT) unable to cope with more than two emergencies at once, according to leaked papers reported on Saturday.

The Times said the Government made the admission in a document seen by its reporters that formed part of a contingency plan called Operation Yellowhammer.

It reportedly states that in the wake of Britain crashing out of the EU without a deal, for months after, the Government may have to engage in a 24/7 emergency approach.

And that priorities in the event of a no-deal will be “welfare, health, transport and security of UK citizens at home and abroad, and the economic stability of the UK”.

The 37-page document, which sets out a guide to working in the DfT operations centre, also states that the “scale of the operation is potentially enormous”, according to the Times.