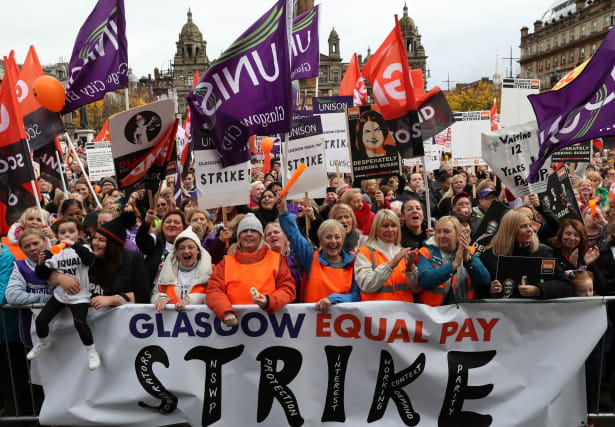 An equal pay deal costing Glasgow City Council more than £500 million could be funded by selling some its most popular venues to an arm’s-length company.

The deal in principle came after thousands of council workers walked out on a 48-hour strike in October to settle the long-running dispute over women’s pay.

On Friday, the local authority published a report to go before members of the City Administration Committee next week, which stated the settlement will cost an anticipated £548 million.

City Property Glasgow Investments LLP (CPGI) was requested by the council to consider what capital could be realised from the property assets of both parties.

The proposals include “the option of sale and leaseback of certain council operational properties”, meaning the company would acquire sites such as the Riverside Museum, SEC Armadillo and Emirates Arena.

Council leader Susan Aitken said: “I’ve always been clear that, although settling equal pay has been about delivering justice for thousands of the women in our workforce, meeting the substantial cost of doing that must be fair for citizens.

“Releasing the potential of our property, while keeping it in the city’s ownership, protects services and the future of these valued assets.”

The paper will go before the committee on Thursday February 6 as discussions continue with potential funders.

Despite the council adopting a Workforce Pay and Benefit Review – implementing a job evaluation-based pay and grading system – in 2006, some women claimed they were paid £3 an hour less than men in similarly graded roles.

Ms Aitken added: “I’m delighted that we have agreement with the claimants and to be able to recommend to my colleagues a deal that finally delivers pay justice for thousands of women in our workforce.

“After a decade going round in circles in the courts, we have reached a fair settlement through 12 months of tough but open and honest negotiations.

“This report is our opportunity to put right a wrong that has damaged the council, its workforce and the city for too long.

“I trust that every member will want to take that opportunity.”