Liam Fox: MPs may not be re-elected if they force a no-deal Brexit 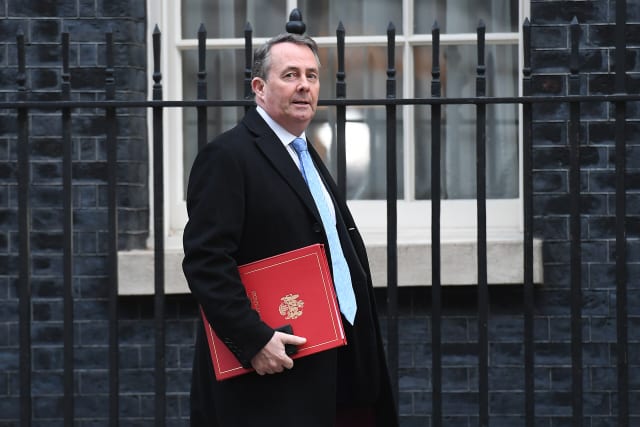 A Cabinet minister has warned MPs that they may not be re-elected to Parliament if they block Theresa May’s Brexit agreement and force the UK to crash out of the EU without a deal.

Liam Fox said politicians would have “little cover when they next face the voters” if their actions led to a no-deal exit, as he became the latest frontbencher to suggest Britain’s withdrawal may have to be delayed.

The International Trade Secretary said Downing Street’s insistence that the UK will leave the EU on March 29, and suggestions by Foreign Secretary Jeremy Hunt and Commons Leader Andrea Leadsom that the exit date could be pushed back were not “incompatible” stances.

“We can get our domestic legislation through if we quickly reach an agreement with the EU and that’s in everyone’s interest.”

Dr Fox, a prominent Brexiteer, said he hoped to avoid a no-deal exit by securing an agreement.

But he warned: “I listen to Members of Parliament complaining about the potential effects of no-deal while voting against the deal itself.

“I think they have to ask themselves whose interests they actually represent because ultimately they will have to answer to their voters for their own decisions.

“Those who block the deal and then complain about no-deal I think will have little cover when they next face the voters.”

Dr Fox also urged the remaining EU members to reach an agreement with the UK “as quickly as possible”, as he said it was “not a good time” to introduce “unnecessary instability” into the European economy.

He told the audience at the Policy Exchange think tank: “We are still aiming to get to the 29th March – that’s the date we promised the British people. The answer is to reach an agreement as quickly as possible. And I think there are factors frankly driving that process.

“This is not a good time to introduce further unnecessary instability into that European economy which is why I hope the European Union will recognise that the best way forward for all of us is to get an agreement as quickly as possible.”