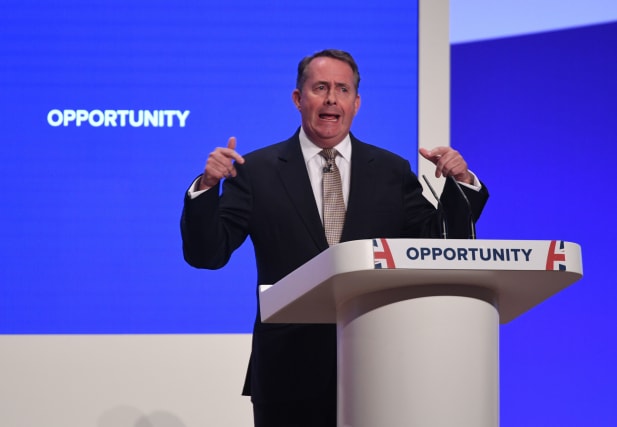 The International Trade Secretary will use a major speech to say that the apparent benefits of economic nationalism are a “mirage”.

His comments come as the US and China are locked in a trade battle which has had repercussions across the world as Donald Trump sought to protect American industries from cheap imports.

Tariffs imposed by Mr Trump on steel and aluminium imports have led to tit-for-tat retaliation by economies including the European Union.

As well as warning of the dangers of protectionism, Dr Fox will say that breaking down barriers to the global trade in services is a key priority for post-Brexit Britain.

In his speech in London, Dr Fox will warn against trade policies which could undermine the institutions such as the World Trade Organisation which govern international commerce.

“Economic nationalism may look like an attractive shelter from the winds of change that have come with the era of globalisation – and even more from the technological revolution in which we find ourselves – but it is a mirage,” he will say.

“The alternative to an international rules-based system is at best a deals-based system that will suit the strongest and at worst a free for all that will put at risk much of the progress we have made in recent decades.”

Dr Fox will set out his hopes for liberalisation in the services sector, a key strength of the UK economy.

The service sector includes a wide range of activities including financial services, travel and information technology.

The Brexiteer Cabinet minister will say that leaving the EU will allow the UK to focus on the sector in its trade policy.

He will claim the global regulatory system for trade in services has failed to keep up with changes in the way business is conducted.

“The UK’s priority must be the liberalisation of the global trade in services,” he will say.

The UK is the second-largest services exporter, with 26 million people employed in service industries.

“Leaving the EU gives us the freedom to pursue an independent trade policy that reflects our unique strengths in services,” Dr Fox will say.

“A recent WTO report estimates that, while services comprise two-thirds of global GDP and employment – and nearly half of world trade on a value-added basis – the barriers to trade in services are about as large as those in goods were half a century ago.”