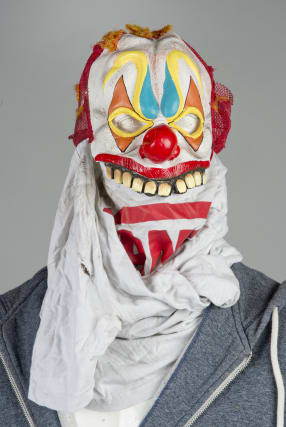 A gang member who donned a “scary clown mask” and brandished a shotgun from a stolen BMW during a police chase is facing jail.

Lekan Akinsoji, 21, and three other young men were pursued by officers during a “ride out” to target rivals in east London, the Old Bailey heard.

One suspect was caught on camera waving a gun out of the window as they drove through narrow residential streets, over speed bumps, at up to 60mph.

Officers, including one who described the white mask as reminiscent of the Hollywood film Heat, opened fire, believing their lives were in danger, jurors were told.

In dramatic dashcam footage played in court, an officer could be heard shouting “Gun. Gun. They’ve got a gun. They are pointing a long barrelled weapon at us.”

The chase came to an end when the BMW was driven the wrong way down a one-way street in Leytonstone.

Akinsoji emerged from the car wearing the clown mask, and all four gang members were wearing gloves and had their faces either partially or fully covered.

Afterwards, police seized an arsenal of weapons, including an axe and a “zombie” knife.

A loaded shotgun was found in the car, while cartridges were discovered on the ground nearby.

Forensic testing showed it had not been fired on the night of July 26 last year.

Akinsoji was linked to the Woodgrange or “E7” gang from Forest Gate, east London, the court heard.

He was on trial alongside Nathaniel Lewis, 23, Darnell Joseph-Newill, 21, and Troy Ifill, 22, who were also said to be associated with east London gangs, who had formed an alliance under the name “Northside Newham”.

All four men had produced a number of “drill” music videos, including videos bragging about gang activity and serious criminality.

Prosecutor Anthony Orchard QC told the jury that their plan when they embarked on their “ride out” was to cause really serious injury or death to a “presumed member of the opposing gang”.

He said the arsenal of weapons found in the stolen car suggested “their obvious intention that night”.

Mr Orchard told jurors: “The police driver, understandably, thought the lives of himself and his colleagues were in danger.

“Having assessed the situation, and as he drove, the police driver fired four shots through the front windscreen of his police vehicle in the direction of the gunman.

“He had been trained to shoot like this. In fact, the shots missed.”

The jury took a day and a half to find them all guilty of possession of a firearm with intent to endanger life and conspiracy to cause grievous bodily harm with intent.

Akinsoji was cleared of attempting to use a firearm to resist arrest.

The court heard that a fifth man, the driver, sprinted away from the BMW and was not arrested.

The defendants were remanded into custody to be sentenced at the Old Bailey on Friday February 8.

Speaking outside court, Detective Chief Inspector Jane Topping, from Scotland Yard’s Trident unit, said: “These four men had gone out that day to commit serious violence and even murder and I have no doubt about that.

“A firearm was brandished out of the pursuit vehicle towards the armed response unit and they really thought they were being fired at.

“There was a sawn-off shotgun, two lock knives, an axe, a machete, a hunting knife and a zombie knife.

“It’s absolutely terrifying people are going around London with these weapons and the Metropolitan Police will take all action necessary to prevent this kind of activity.”