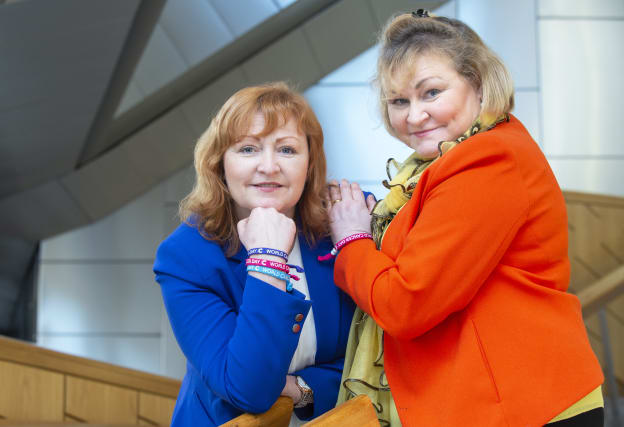 An MSP and her breast cancer survivor sister are urging people to help raise money for research by wearing a unity band to support World Cancer Day.

Emma Harper MSP was devastated when her sister Buffy was diagnosed with cancer and will think of her sibling as she leads a debate in the Scottish Parliament next week in honour of the day.

Buffy Forbes, 50, was diagnosed with grade three breast cancer on January 7 2016 and received chemotherapy then surgery and finally radiotherapy at Dumfries and Galloway Royal Infirmary, with her treatment ending on September 29 that year.

She also received 17 Herceptin injections and continues to take Tamoxifen, a treatment that aims to reduce the risk of some types of breast cancer returning.

Throughout her treatment she was supported by her three sisters, Emma Harper, 51, Phyllis Murphie, 54, and Karen Harper, 55,

Mrs Forbes, from Ecclefechan in Dumfries and Galloway, carried on working as an ophthalmology clinical nurse specialist at Cumberland Infirmary in Carlisle through part of her treatment.

She said: “Being a nurse, I was very practical in my attitude to being diagnosed with cancer – I wanted to know what kind of treatments I was going to receive, and I had total faith in the people looking after me.

“What impressed me was that the treatment was so personalised in that it was tailored towards the type of cancer I had and the stage it was at.

“Cancer has had a big impact on me. It’s taken me a good two years to recover and feel better. And throughout this struggle I was so grateful to my sisters.

“I feel so grateful to now feel well again and I want to make the most of it by making every moment count.

“That includes helping to raise vital awareness and funds. It’s thanks to research I’m still here today, spending time with the people who are so dear to me.”

Mrs Forbes and Ms Harper are urging people to make a donation for a unity band in support of Cancer Research UK’s World Cancer Day on Monday February 4.

Ms Harper, SNP MSP for South Scotland, will also lead a debate for World Cancer Day in the Scottish Parliament on Tuesday February 5.

She said: “We were all devastated to learn that Buffy had cancer and, as sisters, of course we all rallied around to support her.

“One in two of us in the UK will be diagnosed with cancer at some point in our lives. It doesn’t discriminate. Whether it’s you or someone you love, cancer leaves its mark on us all.

“Seeing Buffy go through cancer, I want to do everything I can to help raise vital awareness and funds.

“That’s why I’m wearing my unity band to show my support to the people who have cancer, the health professionals who care and support those with a diagnosis, as well as those who are working so hard to find better and kinder treatments.

“I hope people across Scotland will join me in being part of a movement that can help make a real difference to so many people’s lives.”