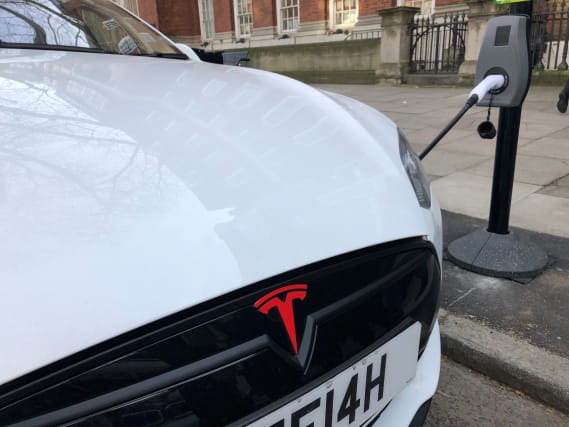 A “smart” system for charging electric vehicles on the street has been launched to boost the take-up of clean cars.

The new public kerbside charging technology, which includes small on-street hubs called “armadillos” as well as “geckos”, which can be attached to existing bollards or signposts, has been unveiled in Southwark, London.

Connected Kerb, the company behind the system, said it includes parking sensors to let people know where a charging bay is free, contactless payment, internet connectivity, and the facility to stop or start a charge from a phone app.

The technology comes as the Government has set out plans to end sales of conventional petrol and diesel cars by 2040.

Councils are grappling with the need to provide on-street charging for town and city residents who do not have their own driveway where they can plug in their electric cars, with options including standalone units or plugs incorporated into street lights.

A freedom of information request by the Press Association suggested only a handful of local authorities are using their streetlight infrastructure to provide a significant number of on-street charging points connected to lamp columns.

The Connected Kerb technology aims to reduce street clutter, with much of the system below ground, and has environmental sensors feeding back information on pollution to the local authority.

It has been future-proofed to allow the armadillos to be recycled into charge pads which will go on the ground of the parking bay when wireless charging is introduced, the company said.

The armadillo units are made from recycled lorry tyres and customers will be able to select renewable power for their charging.

It is designed to allow residents who do not have off-street parking to charge their cars slowly, for example overnight, although there is the capacity for a faster boost.

Connected Kerb, which won the Mayor of London’s Award for Urban Innovation last year, is also installing a scheme in Windsor and hopes to have 30 to 40 test projects around the country in the coming months.

Chief operating officer Paul Ayres said: “We estimate 70% to 80% in urban residential areas don’t have off-street parking and don’t have the ability to install their own charge point.

“The burden of responsibility falls on councils or private sector to provide the infrastructure to enable the electric vehicle transition.

He said the company’s role is to enthuse consumers to move to electric, and overcome the issues of confidence and convenience that are still barriers to the shift to clean cars.

He added: “If we reduce emissions people’s health improves.

“We’re doing things from a perspective of trying to improve the environment and ecosystem, not just for us but for future generations.”

Southwark Council is working with Connected Kerb on the scheme, which is also supported by Virgin Media and National Grid, and it is hoped it could be followed by a wider rollout in other London boroughs.

Southwark’s cabinet member for environment, transport management and air quality Richard Livingstone said the data supplied by air quality monitors in the chargers would add to the existing monitoring network.

He said: “We want to help people to make decisions that improve air quality here in Southwark, be that by walking, cycling and taking public transport or by using clean fuel.

“These new charge points are making it easier than ever for people who live in Southwark to make the switch to electric vehicles.”