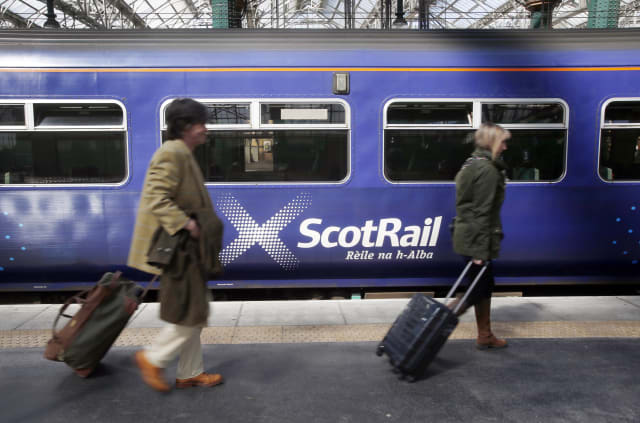 Passenger satisfaction with ScotRail has fallen to its lowest level in 15 years, according to a national survey.

Independent rail passenger watchdog Transport Focus questioned 1,309 ScotRail passengers as part of its autumn survey and found overall satisfaction with the rail operator has fallen to 79% – the same as the UK average.

ScotRail said it had “much more to do” to tackle challenges but welcomed just under four out of five customers being satisfied with the service.

The national rail passenger survey (NRPS) was carried out between between September 1 and November 16 last year.

The watchdog pointed to delays and cancellations for passengers being less happy than at any time since 2003, when satisfaction was at 84%.

In the latest survey, satisfaction with ScotRail’s punctuality fell 10 percentage points to 72% compared to the previous autumn survey.

Passengers satisfied with the value for money fell eight percentage points to 51% in the same period.

These were among nine categories which had significant declines and of the more than 40 aspects of the train and station surveyed, only two showed significant improvement – the availability of wifi and cycle parking.

Transport Focus director David Sidebottom said: “ScotRail and Network Rail need to keep to their basic promises and deliver a relentless focus on day-to-day performance as well as better information during disruption.

“A better value for money and more reliable railway must arrive soon for passengers.”

Opposition politicians called for the Scottish Government to take action.

Scottish Labour’s transport spokesman Colin Smyth said: “It is little surprise that passenger satisfaction with ScotRail has plummeted after months of delays, cancellations and overcrowding on our trains.”

He said the franchise should be halted and the railways brought into public ownership, and also called for a fare freeze.

Scottish Liberal Democrat transport spokesman Mike Rumbles said: “The situation for passengers is worse now than it was before the current franchise started.

“If things don’t improve rapidly the Scottish Government should cut the contract short and look for a new operator.”

Phil Campbell, ScotRail head of customer operations, said: “While it’s good news that four out of five of our customers are satisfied with ScotRail, we know there is much more to do given the challenges we have faced in recent months.

“Everyone at ScotRail is working flat out to deliver the improved service our customers expect and deserve.”

“We have taken the serious contractual step of issuing a remedial plan notice for the high level of cancellations and performance which are inextricably linked to passengers’ views.

“Performance across the United Kingdom has not been good and many underlying issues are endemic across UK rail franchises.”

He said passengers want improvement across the whole ScotRail Alliance, including Network Rail and called for Scotland to be given more control over this part of the network.