Nick Clegg defends Facebook’s use of data and advertising 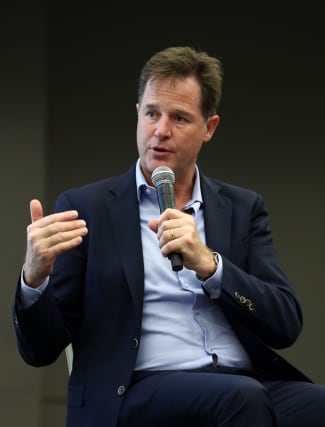 Sir Nick Clegg has defended Facebook’s use of data and called for tech firms and politicians to work together to regulate social media.

His comments, in his new role as the social network’s head of global affairs, came as an influential MP called for the creation of a new regulator to police social media.

Damian Collins, the chair of the House of Commons Digital, Culture, Media and Sport Committee, said that a regulator could take action in cases like the suicide of Molly Russell, whose parents have blamed her death on disturbing images she saw on Facebook’s picture-sharing service Instagram.

In his speech in Brussels, the former deputy prime minister said that, while Facebook’s fast growth meant it had “undoubtedly made mistakes”, the site had learned some “hard lessons” and was now entering a new phase of “reform, responsibility and change”.

The ex-Liberal Democrat leader said Facebook alone should not be making ethical or political decisions about what should or should be allowed on social media, and called on governments and regulators to work with the platform.

“Everyone has a role in this. Facebook doesn’t have all the answers,” he said.

“But nor do governments or regulators either. We must learn from each other and work together.

“I know there are few debates that are as important as this. The time is ripe to bring together the best ideas from Europe, from Silicon Valley and beyond, to set the rules for an internet that works for all.”

Sir Nick also reacted to the recent debate around images of self-harm on Facebook-owned Instagram, saying it was an area where the company “had a lot more work to do”.

On the platform’s use of data and advertising, he argued that Facebook wanted its services to be available to all, and an advertising-based model allowed that over a subscription-based model, which he said would leave some users behind.

“Our choice of business model carries with it serious legal and ethical obligations – it means we have to be transparent with people about what information we collect and why,” he said.

“It means giving people control over the ads they see and helping users to understand the choice they’re making. We’re constantly looking to improve on both counts.”

Sir Nick added that the site was starting a two-week process to remind all users to check their privacy settings on Facebook. Calling privacy a “fundamental right”, he said it had to be a “guiding principle” for the company.

“It means we have a duty to engage with the public concern that ‘Facebook knows too much about you’,” he said.

“Crucially, this is not only a duty for Facebook; it is something we all need to do more broadly if we are to establish public consent for the new ways in which a data-driven economy operates.”

He said questions around privacy “are not unique to Facebook”, adding that information about internet users’ various habits was passed between different services every day.

“It is, for better or for worse, how the internet works,” he said.

“It seems to me that, underlying a lot of the criticisms of Facebook’s business model, is an assumption that advertising is inherently exploitative, and that any free service that is funded by ads is, by definition, questionable. I don’t share that view.

“There is such a thing as responsible advertising and it has underpinned countless TV channels, newspapers and magazines for years.”

Sir Nick said that, while Facebook had become the “poster child” for data-driven business, the issues went “far, far beyond” just the social network giant and urged people not to forget the advantages data sharing can bring.

However, his speech was criticised by Mr Collins, who said Facebook had “failed” to meet its obligations.

In a tweet, he said: “Nick Clegg has clearly already drunk the Facebook kool-aid. He speaks about the ‘serious legal and ethical obligations’ that Facebook has. It’s a shame that Facebook has failed to meet these time and time again. This is all too little, too late.”

Mr Collins later told BBC Radio 4’s PM: “If anything, I think we’ve reached a point where we have to say we can’t just rely on the goodwill of companies like Facebook to police their own platforms properly or even enforce their own rules.

“We need external bodies that have got the power to set rules and standards for them.”

Mr Collins added: “We could establish either a new regulator or give Ofcom the power to set standards for tech companies and go in and investigate whether they are meeting them or not.

“So in a case like the tragic case of Molly Russell, a regulator could go into Facebook and say ‘Show us what you were doing that led to those images still being there. Why did you fail to spot them and take them down?’ and could make a judgment on whether they are meeting an acceptable standard or not.”

Sir Nick was also asked about the social media site’s plans to merge the messaging infrastructure of its family of apps – which includes Facebook Messenger, Instagram and WhatsApp – but said any process was in the “early days” and had only been discussed on a preliminary basis.

He also confirmed that the company’s political advert transparency tools already introduced in the UK would be rolled out across Europe for issues related to European Parliament elections taking place in May.

He added that an “election integrity centre” would be opened in Dublin as a hub for spotting hate speech, misinformation and attempted election interference on the site ahead of the polls.