Charles gets behind wheel of electric London black cab 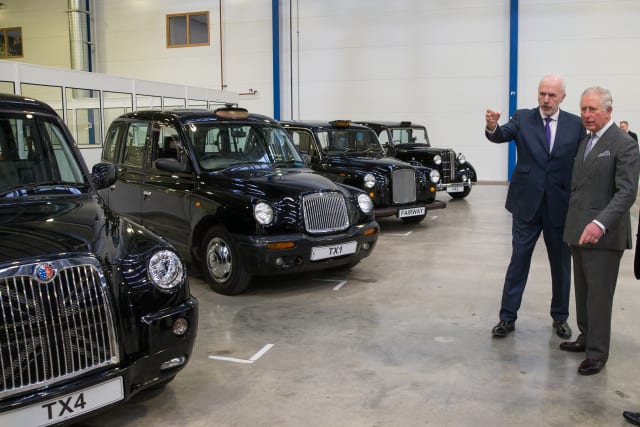 The Prince of Wales looked as if he was waiting for a fare when he got behind the wheel of a London black cab – but he did not have much luck.

Charles tried out the electric taxi, which had just rolled off the production line, during a visit to cab manufacturer the London EV Company in Coventry when he toured the Midlands.

The heir to the throne already has eco-friendly cars he uses in public and private, from his £60,000 Jaguar I-Pace, which takes him to official engagements, to his prized Aston Martin DB6, which runs on bioethanol fuel.

During his visit, Charles was shown a collection of heritage vehicles representing the firm’s 70 years of black taxi production, from the FX3, released in 1948, to London’s new electric taxi, TX eCity, which went on sale last year.

Charles later visited his shoemaker Tricker’s in Northampton, and was shown wooden moulds, known as lasts, used to make shoes for the Queen, Gringotts goblins from the Harry Potter films and size 22 lasts for former American basketball star Shaquille O’Neal.

Established in 1829, the company has held a Royal Warrant from the prince since 1989 and decades ago established a reputation for its heavy country boots and shoes for farm, estate owners and the landed gentry.

Charles wished the firm happy birthday during his visit, saying: “Many congratulations everybody on reaching your 190th birthday.

“Sorry it has taken me 190 years to get here. Marvellous to see such a highly skilled operation. I do congratulate you and I hope you manage to keep it all going for many, many more years.”