Brexit could be delayed in short-term to ensure deal: Andrea Leadsom 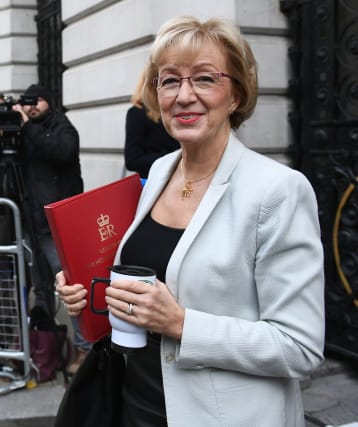 The UK may seek to delay leaving the EU “by a couple of weeks” in order to get Brexit legislation through Parliament, Commons Leader Andrea Leadsom has suggested.

The prominent Cabinet Brexiteer insisted it would be “feasible” to remain in the bloc for a time after the scheduled exit date of March 29.

Mrs Leadsom told BBC2’s Newsnight: “We can get the legislation through.

“And in particular I think we do, in spite of everything, have a very strong relationship with our EU friends and neighbours and I’m absolutely certain that if we needed a couple of extra weeks or something, that that would be feasible.”

Mrs Leadsom added: “I think we would want to think carefully about it.

“But as things stand, I do feel that we can get, with the support of both Houses, the House of Commons and the House of Lords, with goodwill and a determination, we can still get the legislation through in time.”

Asked whether a delay would man an extension of Article 50, Mrs Leadsom said: “It doesn’t necessarily mean that. Think carefully about it. With goodwill it can still get it through in good time.”

Mrs Leadsom called for Cabinet unity, insisting Britain could still leave the EU without a deal at the end of March.

She said: “I’m totally aligned to the Prime Minister. I believe that is where collective responsibility should lie.

“So number one, the legal default is we leave the EU on March 29 without a deal unless there is a deal is in place.

“That hasn’t changed. That is the Prime Minister’s view and that’s my view.

“Of course, it is also very important that we continue to prepare for all eventualities because we do need to make sure that in all circumstances the UK can continue to thrive and do well in a post-EU environment.

“I do encourage my colleagues in Cabinet to get behind that sentiment and to make sure that we are all on the same page. We are now in the really final days.”

Mrs Leadsom’s comments came after Chancellor Philip Hammond piled fresh pressure on Theresa May by declining to rule out quitting if the UK goes through with a no-deal Brexit.

Mr Hammond said “a lot depends on the circumstances”, after he was repeatedly asked whether he could remain in the Government if the Prime Minister decides to take the UK out of the EU without a Withdrawal Agreement.

His comments on BBC Radio 4’s Today came after he had told the programme a no-deal Brexit would cause “significant” disruption and damage to the economy, and that it went against what Leave voters had been told before the 2016 referendum.

On Thursday evening, Work and Pensions Secretary Amber Rudd hinted she could resign from the Government to stop a no-deal scenario.

The Work and Pensions Secretary, a prominent Remain supporter, said she will “wait and see” if Mrs May allows a free vote on a series of amendments to her Brexit Plan B in the Commons on Tuesday.

Mrs May’s official spokesman played down the significance of Ms Rudd’s remarks, telling reporters: “What I heard from the Work and Pensions Secretary multiple times was that the best way forward for the country is to support the deal, and that is what the Prime Minister and her ministers are working towards.”

Asked about his future in a no-deal scenario, Mr Hammond, who is in Davos at the World Economic Forum, told Today: “I’m not going to speculate because a lot depends on the circumstances, what happens.

The developments came as the Queen spoke in favour of individuals seeking “common ground” and “never losing sight of the bigger picture” – comments which have been interpreted by some as a veiled reference to the toxic mood of the public debate around Brexit.

She also extolled the virtues of “respecting” the other person’s point of view.

Meanwhile, after a proposed cross-party call for a second referendum was pulled on Thursday, Labour Remainers have tabled their own amendments in a bid to ensure demands for a People’s Vote are considered by the Commons on January 29.

The Murrison amendment appears to offer Brexiteers who rebelled against Mrs May last week a route to reconciliation, stating that its backers “would support the Withdrawal Agreement subject to this change”.

The move came as Irish premier Leo Varadkar warned soldiers may return to the border if Brexit goes “very wrong”.

He said that in a worst-case scenario there could be a return of armed customs posts after the UK leaves the EU.

The Taoiseach told Bloomberg TV the border at present is “totally open”, but if things go “very wrong” it could “look like 20 years ago”.