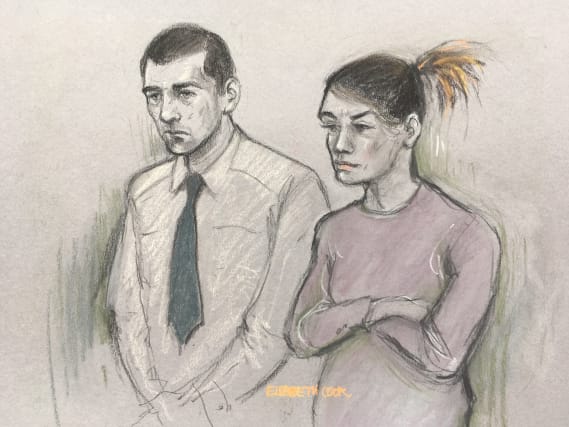 A man accused of crushing his girlfriend’s toddler with a car seat threatened to make her “disappear” if she told what happened, a court has heard.

Three-year-old Alfie Lamb was allegedly squashed in the footwell of an Audi convertible by Stephen Waterson, 25, on February 1 last year.

His mother Adrian Hoare, 23, then lied to police about what happened, claiming he went “floppy” after they were given a lift in a friend’s Volkswagen Golf, the Old Bailey heard.

But jurors have been told they had actually been returning home to Croydon, south London, after a shopping trip with Emilie Williams, 19, from Blackpool, and Waterson’s stepbrother Marcus Lamb, 22.

On hearing of Alfie’s death, Hoare’s half-sister Ashleigh Jeffrey determined to find out “the truth” and repeatedly pressed for information.

Giving evidence, Ms Jeffrey said the group appeared “shut off” and refused to answer her questions when they let off balloons in Alfie’s memory.

Following a visit to St Thomas’s Hospital to view the body, Ms Jeffrey accompanied her half-sister back to Waterson’s Croydon flat, where the group gathered.

Prosecutor Duncan Atkinson QC asked: “Did you have another go at finding out what happened to Alfie?”

Ms Jeffrey said: “I did try. This time they ended up having a bit of a debate in front of me about keeping up the lies they had already told.”

She said Waterson had warned everyone to keep up the pretence otherwise “he would make them disappear”.

On February 15, Waterson “kicked off” and Hoare and Mr Lamb went to Ms Jeffrey’s house, the jury heard.

With Hoare’s knowledge, Ms Jeffrey recorded their conversation on her mobile phone, which was replayed in court.

In it, Hoare could be heard saying that Alfie had been “whinging” on the journey in the car.

She said: “Alfie was behind Stephen in between my legs. We had not been in the car that long, to be fair, and Alfie was whinging.

“He was just whinging. Stephen moved the chair back. I told him to move the chair forward. Emilie was like ‘he’s fine, he’s got room’ so he left the chair where it was.

“When we got out, Stephen went to lift him out of the car. He was floppy. Stephen thought he was f****** about.”

Ms Jeffrey kept asking why it had been “such a big secret” and everyone had to keep it “hush hush” for Waterson’s sake.

She told jurors that she handed over the recording to police straight away.

During Hoare’s earlier police interview on February 3, she told how she had moved in with her mother in Chatham, Kent, after Alfie’s father Richard Lamb burnt down their house.

The defendant, who trained to be a hairdresser, denied knowing nightclub worker Waterson, claiming she was seeing a man called Stephen Marchant from Maidstone.

Hoare, Waterson and Williams have since pleaded guilty to conspiring to pervert the course of justice by making false statements to police.

Father-of-two Waterson has pleaded not guilty to manslaughter and intimidation of Mr Lamb.