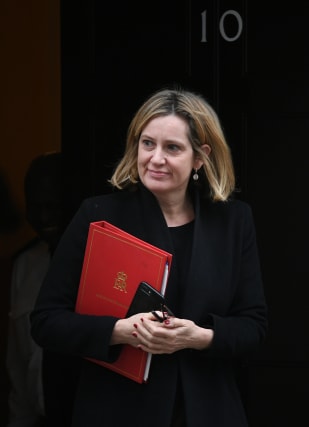 Pressure has mounted on the Prime Minister to rule out a no-deal Brexit after Amber Rudd hinted she could resign from the Government to stop the UK crashing out of the EU without an agreement.

The Work and Pensions Secretary, a prominent Remain supporter, said she was going to “wait and see” if Theresa May allows a free vote on a series of amendments to her Brexit “Plan B” on Tuesday.

During an interview with BBC Two’s Newsnight, Ms Rudd was asked three times whether she would quit the Cabinet to back a bid by Labour’s Yvette Cooper to extend Article 50 unless a deal is reached by the end of February.

She said: “At this stage I’m going to stick to trying to persuade the Government to allow it to be a free vote.

“There is a lot taking place and there are a lot of new amendments.

Ms Rudd told the programme she is “committed to making sure we avoid no-deal”, which she described as “the worst possible outcome”.

It came as the Queen spoke in favour of individuals seeking “common ground” and “never losing sight of the bigger picture”, comments which have been interpreted by some as a veiled reference to the toxic mood of the public debate around Brexit.

The monarch, in a speech to mark the centenary of the Sandringham Women’s Institute, also extolled the virtues of “respecting” the other person’s point of view.

She said: “Every generation faces fresh challenges and opportunities.

“As we look for new answers in the modern age, I for one prefer the tried and tested recipes, like speaking well of each other and respecting different points of view; coming together to seek out the common ground; and never losing sight of the bigger picture.

“To me, these approaches are timeless, and I commend them to everyone.”

Elsewhere, Jeremy Corbyn faced a revolt by his backbenchers who support a second referendum, as three Labour MPs reportedly tabled amendments to his amendment to the Prime Minister’s Brexit “plan B”.

Angela Smith confirmed that she had tacked her own amendment calling for a second referendum to his plan, telling the Press Association that it would move the party on in the way it agreed at conference in September.

“Given that the no confidence vote has taken place there’s absolutely no reason now why we shouldn’t be moving forward to this position,” she said.

– A string of union bosses visiting Downing Street for talks on Mrs May’s Plan B urged the Prime Minister to take no-deal off the table or ask for an extension of the two-year Article 50 negotiation period.

– Business Minister Richard Harrington declared he is happy to be sacked by the PM if she objects to him speaking out about the dangers of leaving without an agreement on March 29.

– Chancellor Philip Hammond told a business audience at the World Economic Forum in Davos that a no-deal Brexit would be “a betrayal of the promises that were made” to voters in the 2016 referendum.

– Airbus chief executive Tom Enders branded the Government’s handling of EU withdrawal a “disgrace” and said the company could pull out of the UK if Brexit undermines its ability to compete.

Mr Enders said the UK’s multi-billion-pound aerospace sector is “standing at a precipice”, adding: “Brexit is threatening to destroy a century of development based on education, research and human capital.

“If there’s a no-deal Brexit, we at Airbus will have to make potentially very harmful decisions for the UK.”

Airbus senior vice-president Katherine Bennett later said the Government had asked the company to “make clear the potential impact of a no-deal”.

But a Downing Street spokeswoman insisted there is “no knowledge in Number 10” of any request.