Key services restored to Londonderry after days of unrest 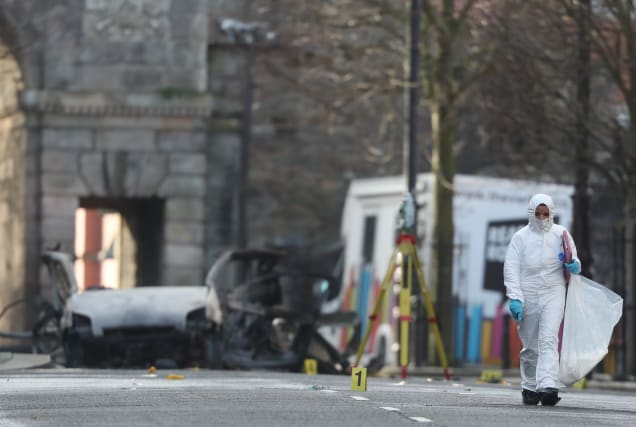 Key services in Londonderry have now been restored to communities affected by this week’s bomb alerts.

Housing executive, postal and transport links had all been disrupted by three security alerts on Monday, as well as a car bomb outside Bishop Street court house on Saturday night, which police have linked to dissident republican group the New IRA.

The alerts saw hundreds of residents evacuated from their homes, as well as companies like Royal Mail halt services to certain areas in the city.

A meeting of the Unity of Purpose group with statutory agencies on Wednesday heard from those working in the city who had been threatened.

Mr Roddy said the group were shocked by the testimony from the workers.

“The Unity of Purpose group meet once a month to talk about all things Derry, but we brought the meeting forward due to the spate of attacks in the city,” Mr Roddy said.

“We’re very much all on the same page on this issue, we were shocked when we listened to the people who are working in our city and are working under threat and in these conditions. It’s madness, and we’re asking those responsible to stop.

“Stop this now, and let our city move forward.

“We have so much in this city to look forward to; we are expanding our university, we are creating opportunities for our young people, we will not be dragged back to the past.”

The MP for the area Elisha McCallion added: “There is a huge degree of anger and frustration at the bomb attack in Bishop Street at the weekend followed by a series of alerts which caused so much disruption and upset to the people of this city.

“This was compounded by the fact that a number of key services including transport, postal and housing maintenance were suspended due to the threats, causing more hardship to local communities.

“Therefore, I welcome that the statutory agencies were today able to confirm that all services have now been restored. That will be some relief to those families and residents who have borne the brunt of the disruption over recent days.

“Today’s meeting also endorsed a planned public demonstration which will take place on Friday Afternoon at 1pm at the Peace Garden in Foyle Street.

“This event has been organised by the trade union NIPSA and I would urge the people of Derry to come along and show their opposition to those behind the recent mindless attacks and disruption.

“This is an opportunity to demonstrate the positivity, the support and the solidarity that is the real story of Derry – a city that is moving forward and won’t be held back by anyone.”

Unity of Purpose came into existence after an Ulster Bank branch in the city was bombed in 2010.