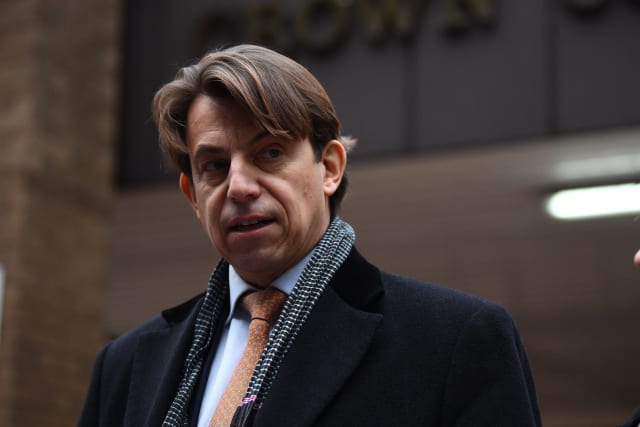 Tesco’s former finance chief has ripped into his ex-employer and the fraud squad after being cleared of wrongdoing over the supermarket’s £250 million fraud and false accounting scandal.

Carl Rogberg, 52, was accused of knowing that income was being wrongly included in records to meet targets and make Tesco look financially healthier than it was.

On Wednesday the Serious Fraud Office (SFO) dropped its case against him, leading Mr Rogberg to speak out on the steps of Southwark Crown Court.

“I have serious questions for Tesco and the SFO about the way this case has been handled throughout,” he said.

“The circumstances were never properly investigated by Tesco from the outset. They rushed to the wrong judgment and then entered into a deferred prosecution agreement (DPA) with the SFO on a completely false basis.

“Truth and justice were abandoned for their commercial imperatives.”

As part of the DPA, the grocery titan agreed to pay a fine of £129 million but avoided a trial.

Mr Rogberg said the sum given to the SFO was “needless” and the “drastic action” has been damaging for Tesco’s employees, shareholders and pension funds.

He also accused the under-fire SFO of “uncritically” adopting Tesco’s approach, failing to carry out a professional investigation and making “fundamental errors”.

“They refused to see the truth”, he said, “preferring instead to drive on blindly with the prosecution. Indeed, they pressed the case through two long trials and even mounted a hopeless appeal against the judge’s decision to stop the case. This was all a dreadful waste of taxpayers’ money.”

His trial was abandoned last year after he suffered a heart attack and he was too ill to face a retrial alongside ex-managing director Chris Bush, 53, and John Scouler, 50, the former UK food commercial director.

Mr Bush and Mr Scouler were cleared of fraud and false accounting last month after a judge at Southwark Crown Court dismissed the case because it was too “weak”.

Mr Rogberg appeared at the same court on Wednesday, where not guilty verdicts were formally entered on the same two charges after the SFO announced it would offer no evidence against him.

Tesco’s shares plummeted by nearly 12%, wiping £2 billion off the share value, when the company announced in September 2014 that a statement the previous month had overstated profits by about £250 million.

Mr Rogberg’s acquittal means neither Tesco nor any of its executives have been successfully prosecuted over one of the biggest corporate scandals in recent history.

Acting for Mr Rogberg, Neil O’May of Norton Rose Fulbright said: “This is more than simply an acquittal by a jury. It is a finding that there was insufficient evidence on which the case could have been brought. This is unprecedented in high-profile serious fraud cases.

“There must be real concern that a serious fraud case is brought without the SFO having expert accounting evidence in which to understand the nature of the case.

“There was also no real investigation undertaken to show whether or not there was indeed fraudulent activity as alleged at the level of buyers and suppliers.”

Lawyers for the acquitted defendants had argued it was unfair to publish the “statement of facts” contained in the DPA, which “ascribes wrongdoing to them”, according to a High Court ruling last week by Sir Brian Leveson.

Speaking after the end of the criminal case, Mr Bush’s solicitor Ross Dixon, of Hickman & Rose, said the case “sounds an alarm call” for the criminal justice system with “contradictory outcomes” between the criminal trial and the DPA.

“Despite being acquitted of all wrongdoing – and as a direct result of the DPA – the SFO now publishes a statement that in effect contradicts these not guilty verdicts.

“This is an unfair and extraordinary outcome and one that calls for urgent reform of the DPA process.”

Mr O’May adding that the DPA “has been shown to be false” and is “deeply prejudicial and distressing” to his client.

“Mr Rogberg feels the law has let him down. He believes the DPA was agreed for commercial purposes and throws justice and the truth to the wind, and him with it,” he said.

Mr Rogberg said of the DPA: “It is a worthless and dishonest piece of paper with no credibility.

“And yet it is still vigorously defended by Tesco and the SFO who stand alone in refusing to accept the truth – even to the extent that Tesco threatened me with costs for daring to challenge what was proven in court to be false.”

Mr Scouler, of The Park, St Albans; Mr Bush, of Four Acres, Green End Road, Radnage, High Wycombe; and Mr Rogberg, of Chiselhampton, Oxfordshire, all denied one count of fraud and one of false accounting.