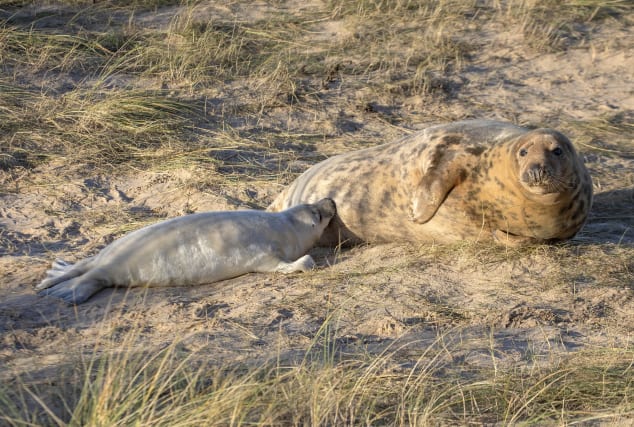 More than 3,000 pups have been born at the UK’s largest grey seal colony, setting a new record for the site, the National Trust has said.

Rangers at Blakeney National Nature Reserve in Norfolk have recorded 3,012 seal pups born this winter, the first time the colony has surpassed the 3,000 mark and the highest number since records began 30 years ago.

The first grey seal pup was observed on Blakeney Point in 1988 and it was established as a rookery or breeding ground for the marine mammals in 2001 when 25 pups were born.

The National Trust said the remoteness of its reserve and the limited amount of disturbance the seals experience is likely to be providing a perfect habitat for them to breed and bring up their young.

Each year, rangers monitor the colony on the remote spit in north Norfolk by counting and recording seal pups throughout the winter.

Ranger Leighton Newman said: “The count, which began on 25 October, started slowly with fewer numbers born in the early days compared to previous years, but by the last week of November, births were in full swing, with an average of 150 pups being born every day.

“We’d like to say a really big thank you to all of our amazing and dedicated volunteers who have spent their time helping us to monitor the colony and speak to visitors this winter, in often cold and windy conditions.

“We are also fortunate to have a really supportive local community and visitors to the reserve.

“They have helped keep disturbance of the seals to a minimum, sticking to waymarked routes, staying clear of fenced-off areas and ensuring that the seals have the space they need.

“This all helps ensure the colony can thrive.”

Around 20,000 grey seal pups have been born at Blakeney over the last 30 years.

With a mortality rate of just 1.5% this winter, the colony appears to be going from strength to strength.

Seal colonies along the east coast have done well this year, with the National Trust’s Farne Islands off Northumberland recording a record 2,602 pups and nearby Horsey seeing births pass the 2,000 mark for the first time with a record 2,068 young.