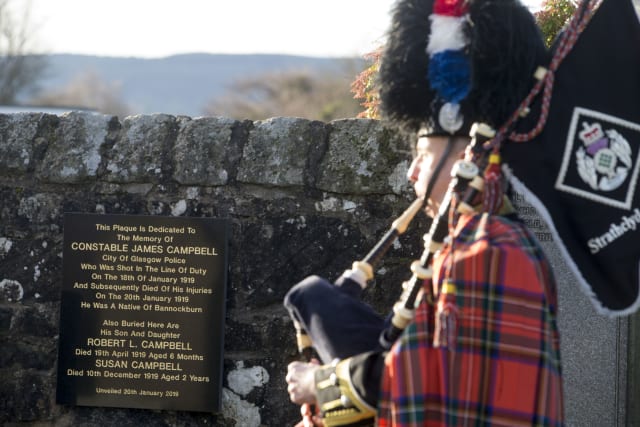 A service has been held to commemorate 100 years since the death of a Glasgow policeman who was killed on duty.

Pc James Campbell was shot when he disturbed housebreakers in the back courts of what is now known as Tollcross Road and succumbed to his injuries two days later on January 20 1919.

The Scottish Police Federation (SPF) marked the centenary on Sunday by unveiling a permanent memorial plaque in Bannockburn Cemetery, Stirling.

Retired Chief Inspector Sandy Geddes, despite having no ties, has been visiting Pc Campbell’s grave since he was a young boy. He said: “We regularly visited the cemetery and my mother would point out the grave and tell us all about ‘the brave Glasgow policeman’.

“So Constable Campbell became something of a legend to me and my family.

“My sister and I have been working for many years to keep the graveside in order, but due to its age that has proven more and more difficult as time has passed.

“That’s when I approached the SPF about helping us with a more permanent solution. When the idea of a plaque was suggested we were delighted.

“We are so grateful to the SPF for helping us keep his memory alive.”

Andrea MacDonald, chairwoman of the SPF, said: “When retired Chief Inspector Geddes contacted us about the idea of a permanent memorial to Constable Campbell, we were delighted to help.

“It is an honour to pay tribute to an officer who gave his life to the service 100 years ago, particularly as this is also our own centenary year.”