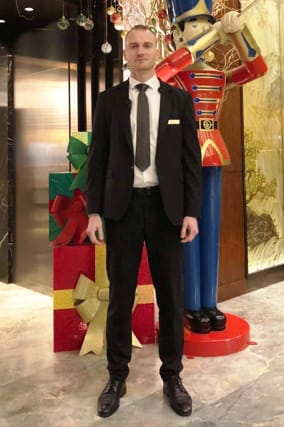 Police investigating the murder of a security guard at a New Year’s Eve party in Park Lane have appealed for information about two “dangerous individuals”.

Tudor Simionov, 33, was working outside the private event at Fountain House in Park Lane in the capital’s West End when he was attacked on January 1 at around 5.30am.

Scotland Yard is appealing for information about Ossama Hamed, 25, and 23-year-old Nor Aden Hamada.

Detective Inspector Garry Moncrieff of the Homicide and Major Crime Command said: “Ossama Hamed and Nor Aden Hamada are dangerous individuals who need to be apprehended. I would urge anyone who has seen them, or knows of their whereabouts, to contact police immediately.

“These are live lines of enquiry, therefore I am not willing to speculate on where they may be but rest assured we are working with colleagues to ensure that if they are in this country, or overseas, we will track them down.”

Mr Simionov was stabbed to death as he tried to stop gatecrashers storming into a party.

Two of his colleagues, aged 29 and 37, were also stabbed during an altercation, as was a 29-year-old woman. All have since been released from hospital, police said.