At least 73 people were killed after a pipeline ruptured by suspected fuel thieves exploded in central Mexico, authorities said on Saturday, as President Andres Manuel Lopez Obrador defended the army despite its failure to clear the site before the blast.

Forensic experts filled body bags with charred human remains in the field where the explosion occurred on Friday evening by the town of Tlahuelilpan in the state of Hidalgo, in one of the deadliest incidents to hit Mexico's troubled oil infrastructure in years.

One witness described how an almost festive atmosphere among hundreds of local residents filling containers with spilled fuel turned to horror as the blast scattered the crowd in all directions, incinerating clothing and inflicting severe burns.

A number of people at the scene told Reuters that local shortages in gasoline supply since Lopez Obrador launched a drive to stamp out fuel theft had encouraged the rush to the gushing pipeline.

"Everyone came to see if they could get a bit of gasoline for their car, there isn't any in the gas stations", said farmer Isaias Garcia, 50. Garcia was at the site with two neighbours, but waited in the car some distance away.

"Some people came out burning and screaming", he added.

To root out the theft, Lopez Obrador in late December ordered pipelines to be closed. But that led to shortages in central Mexico, including Hidalgo, where local media this week said more than half of the petrol stations were at times shut.

Hidalgo Governor Omar Fayad said 73 people were killed and 74 people injured in the explosion, which happened as residents scrambled to get buckets and drums to a gush at the pipeline that authorities said rose up to 23 feet (7 meters) high. 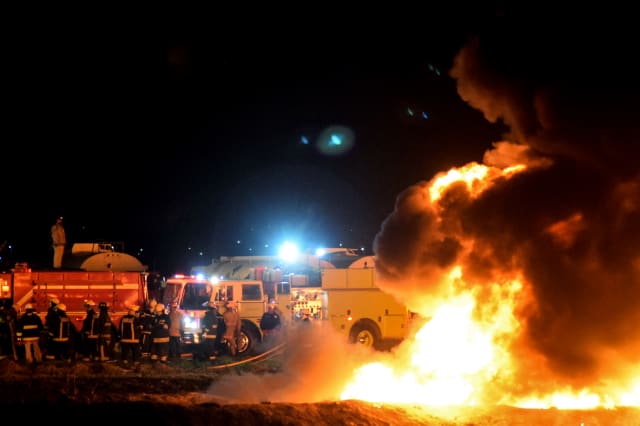 Fayad said the condition of many of the injured was deteriorating, and that some had burns on much of their body. Some of the most badly injured children could be moved for medical attention in Galveston, Texas, he added.

Hidalgo Attorney General Raul Arroyo said 54 bodies were so badly burned that they could take a long time to identify.

The crackdown on fuel theft has become a litmus test of Lopez Obrador's drive to tackle corruption in Mexico - and to stop illegal taps draining billions of dollars from the heavily-indebted state oil firm Petroleos Mexicanos (Pemex).

Video on social media showed people filling buckets from the pipeline during daylight hours in the presence of the armed forces before the blast.

But Lopez Obrador, who vowed to continue the crackdown on theft, defended the army in the face of questions about why soldiers failed to prevent the tragedy.

"We're not going to fight fire with fire," the veteran leftist said. "We think that people are good, honest, and if we've reached these extremes ... it's because they were abandoned."

In the aftermath, soldiers and other military personnel guarded the cordoned-off area that was littered with half-burned shoes, clothes and containers. 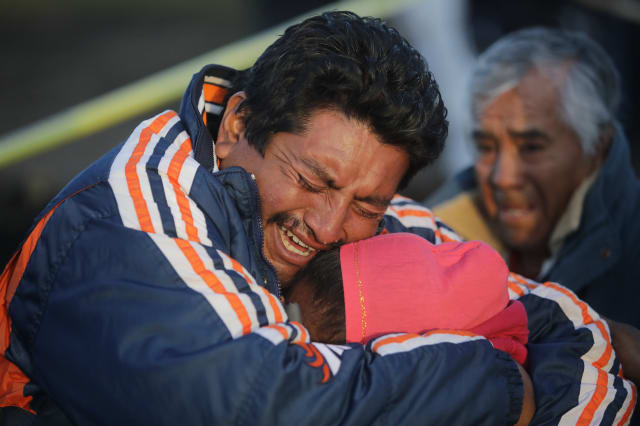 More than 100 people gathered at a local cultural centre on Saturday afternoon, hoping to get information about loved ones who disappeared. Officials posted information about DNA tests for identification and a list of people taken to hospital.

Lopez Obrador said the army had been right to avoid a confrontation due to the large number of people seeking to make off with a trove of free fuel - a few litres of which are worth more than the daily minimum wage in Mexico.

Blaming previous governments for neglecting the population, he said the priority was to eradicate the social problems and lack of opportunities that had made people risk their lives. He rejected suggestions the incident was linked to his policy.

Still, Lopez Obrador had vowed to tighten security in sensitive sections of the oil infrastructure, and the ruptured pipeline was only a few miles away from a major oil refinery.

Pemex's Chief Executive Octavio Romero told reporters that there had been 10 illegal fuel taps in the same municipality in the last three months alone. Neither he nor the president said exactly when the valves to the pipeline were closed.

Relatives of victims stood huddled together, some of them crying, after the massive blast. Much of the rush to siphon off fuel and the chaos of the explosion was captured on mobile phones and began quickly circulating on social media.

Mexican media published graphic pictures of victims from the blast site covered in burns and shorn of their clothes. 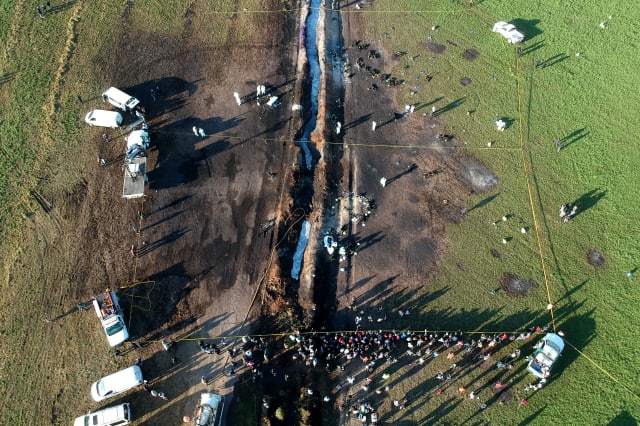 Local journalist Veronica Jimenez, 46, arrived at the scene before the explosion where she said there were more than 300 people with containers to collect fuel.

"I saw families: mother, father, children," she told Reuters. "It was like a party...for a moment you could even hear how happy people were."

When the blast hit, people ran in different directions, pleading for help, some burned and without clothing, she said.

"Some people's skin came off...it was very ugly, horrible, people screamed and cried", she said. "They shouted the names of their husbands, brothers, their family members."

Grief-stricken family members blocked access to the field for over half an hour, saying they would not let funeral service vehicles pass until they were told where the dead were being taken.

Lopez Obrador has said his decision to close pipelines has greatly reduced fuel theft, but the death toll has raised questions about potentially unintended consequences.

"There was a gasoline shortage, people one way or another wanted to be able to move around", said local farmer Ernesto Sierra, 44. "Some even came with their bean pots."