A lounge at the team's Selhurst Park stadium will be turned into an overnight refuge for up to 10 homeless people when temperatures hit zero or colder, the club said. 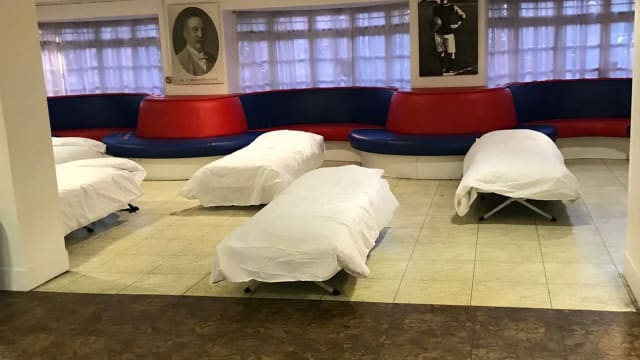 The scheme, for rough sleepers in Croydon, south London, provides a camp bed, a hot dinner, breakfast and washing facilities.

Eight people used the shelter on Thursday night, the first time it was opened, the club said in a statement.

The initiative has been agreed between Croydon Council and Crystal Palace.

Club chief executive Phil Alexander said he was "delighted" and thanked both volunteers and supermarket Sainsbury's for providing food.

He said: "The club wants to be a force for good in the community and we are happy to do our bit to help those most in need."

Councillor Alison Butler said it was a "wonderful gesture" by Crystal Palace, which is "setting a standard for other clubs to follow".

The space is returned to normal for club use in the mornings and when the team plays home games rough sleepers will be referred to other emergency shelters, the statement added.

Support workers will look to get those using the shelter into longer-term accommodation and help with financial advice.