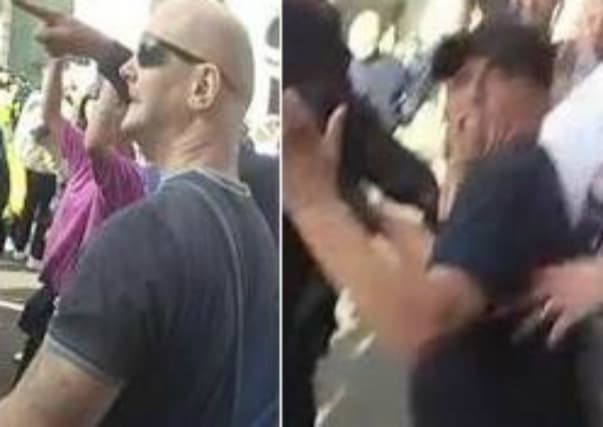 Detectives have released images of two men who allegedly kicked and punched a police officer during a protest in central London.

The male officer was on duty at a cordon across Pall Mall at the junction with Waterloo Place in Westminster on October 13 last year when he was attacked.

The rally by the anti-Islam Democratic Football Lads’ Alliance (DFLA), planned as a silent march, spun out of control after supporters pushed through police escorts and got into fights with officers.

Scotland Yard said the first suspect allegedly punched him from behind and, about a minute later, a second man kicked him.

The pair then fled into the crowd.

The officer was not injured.

Both suspects are white men who are aged between 40 and 50.

The first is around 5ft 10in and of medium build. He had a shaved head and was wearing a dark blue T-shirt with dark-coloured jeans and sunglasses.

The second suspect is around 5ft 7in and stocky. He was wearing a dark blue polo shirt with dark-coloured jeans and a dark-coloured baseball cap.

Detective Sergeant Matt Simpson, of the Met’s Public Order Investigations Team, said: “It is despicable that some people think it is acceptable to assault and cause harm to officers whilst they are helping to keep Londoners safe.

“If you can identify these men or offer any information to assist the investigation, please get in touch.”