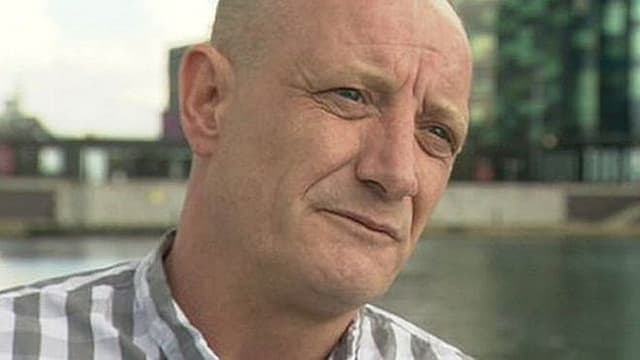 A gangland hitman is facing life behind bars after being convicted of the double murder of a mob enforcer and an underworld Mr Big.

Mark Fellows, 38, nicknamed The Iceman, murdered Salford mobster Paul Massey with an Uzi machine gun outside his home in the city in July 2015.

Father-of-five Massey, 55, a notorious “Mr Big” crime figure in Salford and beyond, was blasted at 18 times as he raised his hands in defence and dived for cover behind bins, a jury heard during a seven week trial at Liverpool Crown Court.

After being shot five times, he died within minutes.

Kinsella, whose help footballer Steven Gerrard called on to scare off a Liverpool gangster known as The Psycho who had been “terrorising” him, was walking his dogs with his pregnant partner, Wendy Owen, near their home in Rainhill, Merseyside, on May 5 last year.

Fellows cycled up, shooting his victim twice in the back with a Webley six-shot revolver.

As Kinsella lay dying, the killer stood over him to fire twice more into the back of his head from close range.

On both occasions his co-accused and “brother in arms” Steven Boyle, 36, had allegedly acted as spotter to ensure the planned victims were in place and to act as back-up, waiting nearby, if needed, which he denied.

Both victims, “notorious” heavy criminals in gangland Manchester and Merseyside, were murdered as a result of a deadly feud between rival gangs in Salford – the A-Team, linked to the victims and a splinter faction the defendants were with.

Fellows was convicted of both murders but found not guilty of the attempted murder of Miss Owen.

Relatives of the victims sat in the public gallery, holding hands and wiping away silent tears, as both men were convicted.

Fellows smiled and nodded as he was found guilty of both murders.

His co-accused Boyle dropped his head and also gave a wry smile as he was found guilty on one count of murder and cleared of the second.

Some relatives of the victims left the court in tears before court was adjourned.

Outside, police in combat gear carrying Heckler and Koch machine guns patrolled the corridors for the duration of the trial; both defendants had in a past hearing tried to burst out of a court building.

The defendants are facing mandatory life sentences for murder and will be sentenced by trial judge Mr Justice William Davis on Thursday morning.

Outside court, members of the Massey and Kinsella families shook hands and shared hugs with police detectives who had worked on the case.