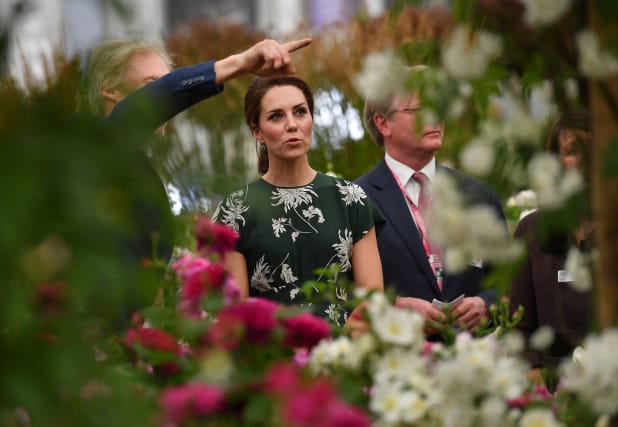 The Duchess of Cambridge is not the only member of the royal family to stage a garden for the RHS Chelsea Flower Show.

Prince Harry, now the Duke of Sussex, became involved when his charity Sentebale commissioned an installation in 2013.

The B&Q Sentebale ‘Forget-me-Not’ Garden by designer Jinny Blom aimed to raise awareness of work to help children who are victims of poverty and the HIV/Aids epidemic in Lesotho.

It featured a pattern based on the idea of hearts and crowns cut into a floating stone in the middle of the garden.

Blom said it symbolised Harry’s loss over the death of his mother and represented a memorial to Diana, Princess of Wales. It won a silver gilt medal.

In 2015, Harry took a keen interest in another Sentebale garden – this time by Matt Keightley, who took inspiration from a children’s centre the charity was building in Lesotho.

The Prince of Wales has had successes of his own at the famous horticultural occasion.

In 2002, his Healing Garden – dedicated to his grandmother the Queen Mother in the year of her death – was awarded the Silver Flora medal in the Best Show Garden category.

Charles’ creation, put together in conjunction with Blom, was full of medicinal herbs and shrubs and culinary plants.

In 2001, the heir to the throne also scooped a silver medal for an Arabic-influenced Carpet Garden, which drew on his interests in Islamic culture.

The Queen, patron of the Royal Horticultural Society, is certain to view Kate’s finished creation – a woodland wilderness inspired by her childhood memories – during her annual visit in May.

Kate is co-designing the RHS Back to Nature Garden with award-winning landscape architects Andree Davies and Adam White.

They will use wild planting and natural materials to provide visitors with a “sense of wonder and magic”.

But the event will not be Kate’s final foray into show gardening.

She will also co-design two further RHS Gardens with the same team, maintaining many of elements from the garden at Chelsea, for the RHS Hampton Court Palace Garden Festival in July and the RHS Garden Wisley in Surrey in the autumn.