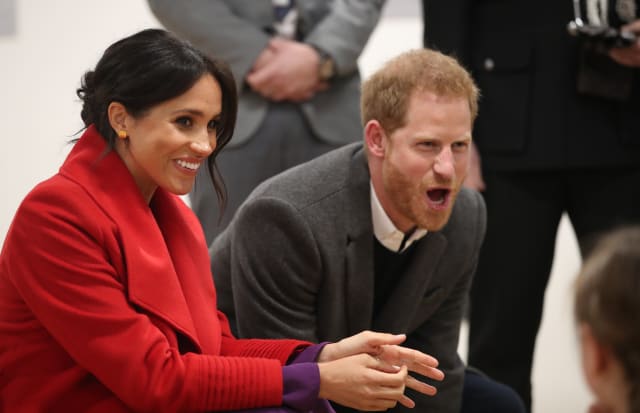 The Duke and Duchess of Sussex will join a Royal Albert Hall audience to watch Cirque du Soleil performers displaying their acrobatic skills in aid of charity Sentebale.

Harry and Meghan will be guests of honour for the evening premiere of the Canadian circus company’s production Totem.

The event will raise awareness and vital funds for the duke’s charity, Sentebale, which helps young people in southern Africa affected by HIV.

During the day Meghan will visit Mayhew an animal welfare charity she is now supporting as patron.

In north-west London the duchess will meet its staff, volunteers and beneficiaries, and hear more about the charity’s various initiatives, from community engagement to international projects.

The evening show will be the second in a series of Sentebale Nights, following on from a fundraising performance of the hit musical Hamilton last year which Meghan and Harry attended.

A 2004 gap year trip to the landlocked African nation of Lesotho inspired the duke to set up his Sentebale charity two years later with the country’s Prince Seeiso, younger brother of King Letsie III.

Their aim was to help youngsters in need and other children who had lost one or both parents to Aids or contracted the disease themselves.

The men established Sentebale in memory of their mothers, with the name of the charity meaning forget-me-not, which Harry later found out was his mother Diana, Princess of Wales’s favourite flower growing up.

In November 2015, Sentebale opened its £2 million Mamohato Children’s Centre in Lesotho to scale up its Mamohato camps – a residential project providing psychological, social and practical support to children struggling to cope with being HIV positive.

That year the charity announced plans to expand into several southern African countries by 2020 and by December 2016, Sentebale launched the first few weeks of its camp in Botswana to 150 children.

Daniel Lamarre, Cirque du Soleil Entertainment Group’s chief executive, said: “We strive to make a difference in the lives of youths and encourage them to change the world.

“It is because both our organisations share these very values that we will proudly dedicate our Totem premiere to the Sentebale Nights, a perfect way to allow us to raise significant funds and awareness together.”

Johnny Hornby, chairman of Sentebale, said:  “We’re very grateful to everyone at Cirque du Soleil for giving us the opportunity to shine a light on the work that Sentebale does to help children and young adults affected by HIV to live happy, healthy and productive lives.”